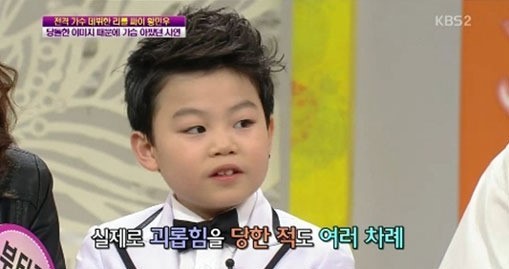 Nine-year-old singer Hwang Min Woo (aka “Little PSY“) revealed that he is being bullied.

On March 26, Hwang Min Woo appeared on “Yeo Yoo Man Man” and said, “This year, I became a second-grader. It’s really fun to study with my teachers and play with my friends. But I still think dancing is more fun than studying at school.”

He continued to say, “Before, other people thought that I looked like I had no manners because I seemed so confident. People around me started to get jealous and hated me for no reason.”

Hwang Min Woo’s mother added, “At school, the upper grade boys would steal Min Woo’s bag and hit him and bully him,” and “Then Min Woo would come to me and say, ‘Why are those people doing this when they don’t even know me?’ as he shed tears.”

Netizens who saw this broadcast commented, “Min Woo, stay strong,” “School violence must come to an end,” “I didn’t know he had that kind of pain behind that bright image,” and more.

In related news, after Hwang Min Woo debuted as a singer, the public was divided on their feelings about his decision.