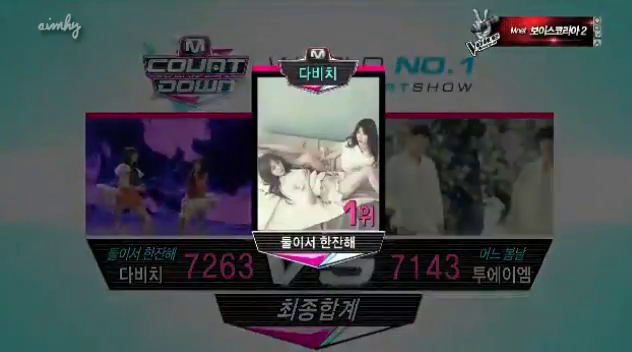 Today’s win at M! Countdown was Davichi with their serene ballad “Just The Two Of Us”, beating 2AM with “One Spring Day”. Today featured the exciting comeback of cute ZE:A FIVE with the catchy song “The Day We Broke Up” and the attitude filled girls from EVOL with the cool song “Get Up”. Today also featured a special performance by SHINee with the rock song “Regret Of The Times” (originally by Seo Taiji & Boys)! Other performances today featured Girl’s Day, Teen Top, RANiA, INFINITE, G.NA, Davichi, Ladies Code and many more.

Next week with feature the comeback performances of K.Will!

Davichi Winning M! Chart Davichi – “Just The Two Of Us”

M! Countdown 2AM vs Davichi Clip