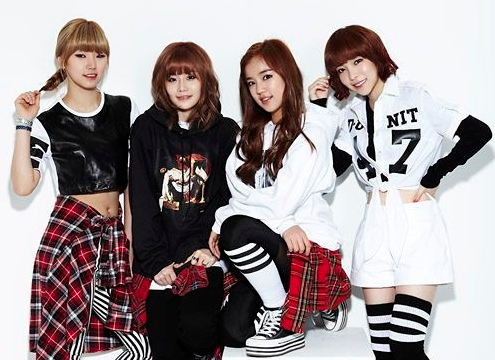 Girl group D-Unit (comprised of members Ram, UJin, Zin and JNey) recently revealed before and after photos of their faces for their “Talk to My Face” performance.

On March 29, D-Unit posted the following photos on their me2day with the caption, “These pictures were taken at today’s ‘Music Bank‘ recording! In one photo, we have bare faces and in the other we have make-up on. Pure and adorable D-Unit!”

In the first photo, D-Unit is not wearing any makeup or BB cream before going on “Music Bank.” In the second photo, D-Unit is all dolled up and ready to go on stage in the “Music Bank” waiting room. The two photos especially drew interest from netizens for showing almost no visible difference between them except for the girls having a slightly brighter skin tone.

Netizens who saw the photos commented, “They look adorable even without makeup” and “D-Unit looks charming in makeup too!”

In related news, D-Unit will be performing “Talk to My Face” on KBS2 “Music Bank” on March 29.

KPLG
D-unit
Talk to My Face
How does this article make you feel?