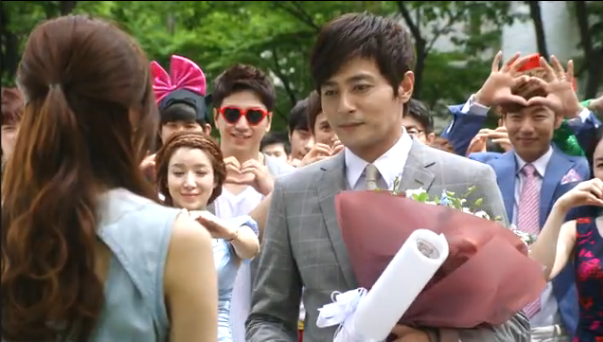 Part 2 of our 15th birthday series: Outside Seoul is a gem that I stumbled on thanks to Google. Amanda, aka Llamaesque, has an impressive number of K-Dramas under her belt, despite being a fairly recent convert to the genre, and brings a new and refreshing look at this wonderful world. -soomp

Fifteen years is a long time, but on the Internet it’s practically forever. In 1998, there was no Facebook. Google was being beta tested. Wikipedia wouldn’t be around for three years, and streaming cute cat videos on YouTube would be impossible for seven more years.

But Internet users back in the dark ages of the late 90s did have one of the things we enjoy today: Soompi. Founded fifteen years ago this week, Soompi even predates the word Hallyu, which wouldn’t be coined for another year.

Since Soompi’s 1998 inception, K-Pop and K-Drama have become worldwide cultural forces enjoyed by people from every imaginable background—including me, an American who has never been anywhere near Asia but is still deeply obsessed with Korean drama.

It’s hard to imagine life without Soompi and sites like it. So in honor of Soompi’s fifteenth birthday, I give you my fifteen favorite reasons to watch Korean drama.

“Playful Kiss”: The first and last time this drama’s heroine showed an aptitude for something, in teddy bear form.

15. Freeze-frame finales. I don’t know who decided that K-Drama episodes should end with split-screen close-ups of the show’s leads, but I’d like to shake that person’s hand. Even a ho-hum ending becomes a cliffhanger when you’re left with your favorite actor’s stunned expression on your television screen. Even more wonderful? Some shows feature closing snapshots depicting their leads in teddy bear form.

14. Two episodes a week! For the first year of my K-Drama obsession I only watched shows that had already finished their runs in Korea. There’s something to be said for this strategy, but it meant that I didn’t get to experience the wonder that is watching a show live. The wait between episodes is exquisite torture that allows for lots of fangirling, but the best part is the thrill of watching a great episode and knowing that you only have to wait 24 hours for another.

See it: On currently airing shows like Nine and When a Man Loves

13. Historical shows that are actually amusing. With the exception of a few outliers (Abraham Lincoln, Vampire Hunter and A Knight’s Tale come to mind), we Westerners just don’t have fun with history the way Korea does. Every batch of Korean shows offers a new crop of the historical dramas known as fusion sageuks—complete with magic, poop jokes, and impossible feats of martial arts bravura. They’re also fascinating exercises in an ongoing re-imagination of history. In the space of a year, the life of a single seventeenth-century Korean queen will be key in two different dramas: Queen In-hyun’s Man and the upcoming Jang Ok-Jung: Live for Love.

See it: In Sungkyunkwan Scandal’s quirky vision of Joseon elevators and telegraph wires, and the time-traveling talisman that drives the action in Queen In-hyun’s Man

12. Gender-bending. K-Drama writers love nothing more than a character pretending to a be a member of the opposite sex. And neither do I, as it turns out. Whether it’s earnest Eun Chan in Coffee Prince or surly Irene in Ma Boy, some of my favorite K-Drama characters aren’t quite what they seem. Gender-bending series tend to be funny and sweet. But beyond that, they’re also stealth commentary on gender politics.

See it: Forgotten gem Painter of the Wind finds a girl posing as a boy so she can attend a royal school for painting, while I Do, I Do’s male lead decides that the fastest way to understand what women want is to dress like one

11. Sincerity. In this age of irony, my fellow Americans are trapped in a world of cynicism and snark. But all we need to do for a refreshing change is to watch some Korean drama, where characters actually mean what they say. In K-Drama coincidence is possible, coolness is optional, and emotions aren’t so much worn on sleeves as they are etched across the sky. The importance of family ties, hard work, and striving for success aren’t things that come up much in my own culture, but they’re all delightfully essential in Korean television.

See it: In Heartstrings’ fireworks scene and the copious tears of Me Too, Flower’s sensitive male lead

“Padam Padam”: The best way to conserve water is by showering with a friend, right?

10. Broody shower scenes, which are all but a legal requirement in K-Dramaland. Nothing goes together better than abs and angst.

See it: Co-ed style in I Need Romance 2012 or with a side of brotherly bonding in I’m Sorry, I Love You

9. Homey, domestic storytelling. K-Drama premises may be over the top, but the shows themselves are always rooted in the world we live in. Characters actually eat, pay bills, and clip their toenails. Being a living human being is a part of the story rather than apart from the story.

See it: In the way Eun Chan crawls into bed with her mom in one of Coffee Prince’s final episodes, and the gory details of cohabiting shared in shows like Attic Cat and 9 End 2 Outs

8. Emotion. No matter what a Korean drama is about, its goal is to make you feel something. How it’s written, how it’s acted, how it’s filmed—all those decisions are made in service of that single purpose. This can make for some pretty pathetic plots, as shows pinball from one emotion-bomb to another, but when done well it draws you into the story so completely that it sometimes feels as if you’ll never recover from your emotional engagement with it. In Western entertainment this often isn’t the case: shows want to wow you with their technique, premise, or diabolically clever plot. They forget that all those things should just be tools for hitting you in the heart.

See it: If the wrenching finale of Autumn In My Heart doesn’t make you sob, there’s probably something seriously wrong with you

“Flower Boy Next Door”: Not to be superficial, but it makes me happy that an entire K-Drama subgenre revolves around cute boys.

7. The boys. Practically every Korean drama is full of beautiful things to look at. And thanks to clever casting and direction that treats men as objects of desire, the most beautiful thing of all is often the male lead: There’s gorgeous Lee Jun Ki, with his lovely almond eyes; Lee Min Ho, he of the luscious, kissable mouth; and Yoon Si Yoon with his little-boy grin. Let’s also not forget Hyun Bin’s architectural cheekbones and Gong Yoo’s knowing, naughty smirk.

See it: Pick any of tvN’s Oh Boy dramas—Flower Boy Ramyun Shop, Shut Up: Flower Boy Band, or Flower Boy Next Door. Or maybe try this summer’s To the Beautiful You for some yummy jailbait

6. Korean culture. In this era of globalization it’s starting to feel as if life is the same wherever you go about living it. But K-dramas offer a glimpse into a culture that’s still uniquely Korean, in spite of outside influences. From women in hanboks and kimchi at breakfast to the way people look away when drinking in front of an elder, the Korean way of life is essential to the appeal of the Korean drama.

See it: The families of Family’s Honor and Sweet Eighteen will show you what it means to be part of a traditional Korean household

5. There’s always something new to watch. A major contributing factor to my K-Drama obsession is just how many shows there are out there. Every three months or so, an entirely new batch of dramas air. Add this continuing output to decades worth of dramas that were completed before I even realized Korean drama existed, and you’ve got the world’s best recipe for couch-potato hermithood. When I started off watching K-Drama I wanted to see it all—every drama, no matter how good or not-so-good it might be. Nowadays I’ve developed a self-protection mechanism I never would have imagined: if I’m not enjoying a series, I stop watching it; if a series gets lousy reviews, I don’t even start it. But barring the invention of a time machine I’m still never going to watch every drama I want to see.

See it: On Mydramalist, a site toxic to things like social lives and productive existences

"Boys over Flowers”: How can anything so cheesy be this...romantic?

4. Romance. If K-Drama were a universe, romance would be its sun: the central focal point that everything revolves around. Starry-eyed and fated, quippy and reluctant, or tragically unrequited, K-Drama love is like nothing else. It’s prone to things considered painfully uncool in the West: grand gestures, piognant longing, and aching tenderness. And as far as I can tell love stories aren’t ghettoized or scorned as “television for women” in Korea. Instead, romance is at the heart of most every drama.

3. Their fun-sized length. Primetime Korean dramas don’t overstay their welcome. Often lasting fewer than 30 episodes, they’re long enough for twisty, turny plotting and meaningful character development, but not so long that you get sick of them. A few K-Drama genres spawn lengthier shows—sageuks are regularly more than 100 episodes long, and sitcoms and daily dramas can be as long as 200 episodes. But even then, the series have a finite number of episodes and complete their runs in less than a year.

See it: If Ma Boy could tell a great story in three episodes, just image what Joseon X-files did with eleven

“Lie to Me”: The only thing this frame is missing is a caption reading “The End.”

2. Real endings. Because K-Dramas have definite lifespans that are established before they air (give or take a few episodes, if there’s a surprise extension), their writers can actually create shows with a specific endgame in mind. And there’s no danger of cancellation getting in the way of reaching that endgame, unlike American shows. This allows for novelistic storytelling: characters are established, conflicts are explored, suspense is heightened, and then the conflicts are resolved. You may not love a show’s ending—maybe everybody dies, maybe the heroine ends up with a guy you hate, maybe the resolution feels too open-ended—but you’ve got to love that it actually has an ending.

See it: In the final episodes of Answer Me 1997, when the show’s central mystery was finally solved, or maybe in the epic, operatic showdown at the end of Time between Dog and Wolf

1. The fandom. Thanks to the hard work of the folks at Soompi and countless other blogs and websites, the Internet is always abuzz with K-Drama talk in almost every language imaginable. From spoilers on Soompi’s forums to gifsets on Tumblr and the latest recaps posted by bloggers, the Internet fandom is a drama-watcher’s (second) greatest pleasure.

See it: Right here on Soompi

For more K-Drama commentary and reviews, visit Outside Seoul.