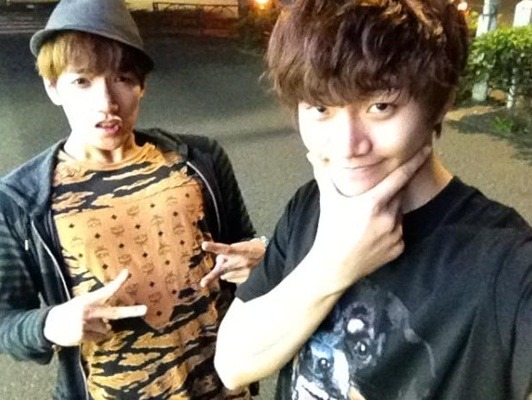 Soompiers, did you enjoy our little April Fools prank with the main images?

If you did, you’re in luck because there have been a lot of funny/shocking April Fools pranks that involves some of your favorite celebrities! Celebrities such as 2PM‘s Junho and Jun.K, FT Island‘s Lee Hong Ki, SS501‘s Park Jung Min, Super Junior’s Shindong, Infinite and 15&‘s Park Ji Min got a little mischievous and decided to pull a leg with funny hoaxes.

Flip through the gallery to see the different and hilarious April Fools pranks!

FT Island’s Lee Hong Ki shocked everyone when he tweeted, “FT Island has decided to break up today. Thank you for showing us love for all this time.”

He continued the joke by saying, “And actually, I’m a vampire,” as he posted a photo of himself with red eyes and white skin.

Junho and Jun.K decided to play a prank as well!

With their May come back not too far ahead, Junho posted, “The entire upcoming 2PM album is written, composed and produced by me. Please be excited.”

At this, Jun.K replied, “This is weak for an April Fools.” Jun.K then proceeded to tweet, “JYP’s headquarters will be moving to Daegu.”

SS501’s Park Jung Min gave quite a scare when he tweeted, “I have something to confess to everyone. I wanted to continue to hide this but actually, I have a child– actually, it’s two children… I apologize for disappointing you all. I will ask for forgiveness as the head of a happy family. Kids, I love you.”

It turns out that Park Jung Min was talking about his two dogs!

Super Junior’s Shindong posted, “I finally got a Macbook. I really wanted one. I’m gonna play with it all night. What should I do first? I heard the sound is awesome so I’ll start with that,” along with a photo.

But instead of a laptop, the photo shows a drum with the Apple logo on it! In Korean, the word “book” sounds like “drum.” Funny!

The Infinite members decided to have a little fun as they switched their profile names on their Twitter accounts. L switched his profile name to “Infinite’s maknae Sung Jong,” and tweeted, “INSPIRITS! This is maknae Jjong. I love you all,” along with a photo of Sung Jong.

Meanwhile, Sung Yeol switched his name to L’s nickname, “Shin Mol Nam,” which, in Korean, is short for “the gods gave everything to this man,” and tweeted, “Hello, I am L, the man that received everything from the gods,” along with L’s photo.

On April 1, a post was made on an online community forum that almost had people believing that Davichi‘s Kang Min Kyung was to make her Hollywood debut.

The post imitated a news article format and said, “Kang Min Kyung has been cast for ‘Jurassic Park 4’ and also contained a poster of the supposed movie.

The post was written by a “Intern Reporter Lee Haeri” and also (falsely) continued to say that Steven Spielburg himself handpicked Kang Min Kyung to star in his next Jurassic Park film!

15&’s Park Ji Min cutely tweeted, “I’m currently discussing marriage plans with an alien on whether we should throw the ceremony on Jupiter or Mars. Where do you think is best?”

Lee Young Ja re-enacted a famous scene from the popular drama “That Winter, the Wind Blows” where Song Hye Gyo touches Jo In Sung to see what his physical features are like.

Lee Young Ja said, “I can’t see so I need to touch in order to know. Oppa, I’m curious about you.” The clip was edited so that Jo In Sung says, “You know where to touch and where not to touch, right?”

The clip showed Lee Young Ja hovering her hand over Jo In Sung’s private area, which made many laugh.

Comedienne Jung Kyung Mi, who recently wedded her long-time boyfriend and also comedian Yoon Hyung Bin, texted him and said, “Oppa, I’m pregnant. What present will you give me?” as a joke.

Then Yoon Hyung Bin replied, “For real? Are you serious? Really? Aha,” and “What am I gonna do now…”

Nineties dance group CLON member Kang Won Rae, who suffered a tragic motorcycle accident, leaving him paralyzed from waist down, tweeted, “Actually, I can walk but I just didn’t want to continue working as CLON so I purposely spent thirteen years sitting down.”