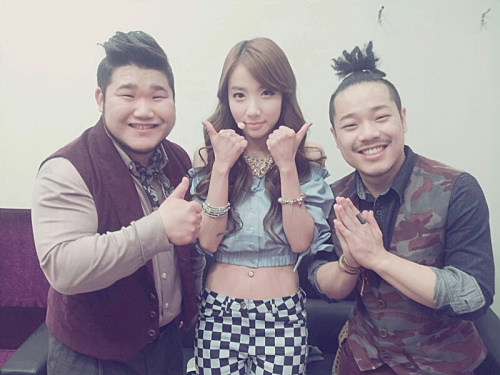 Rainbow’s Jisook showed her friendship with the male duo Gilgu Bonggu. Jisook wrote on her me2day on April 2, “I met Gilgu Bonggu at the waiting room. Their song is really awesome! I am listening to it in a loop. Please listen to Gilgu Bonggu’s ‘I Think I Will Go Crazy’ which will really stimulate your emotions. The quality is awesome! The best”

In the picture, Jisook is shown wearing a blouse that shows her cute belly. In the picture, Gilgu Bonggu are shown with their thumbs up right next to her.

Rainbow is currently performing “Tell Me Tell Me.” This song was a part of their first official album “Rainbow Syndrome – Part. 1,” which was released on February 12.