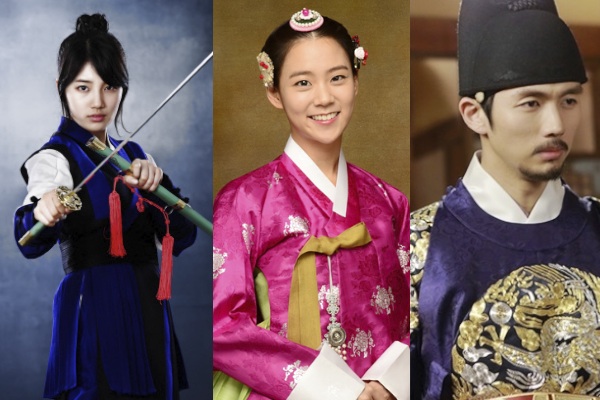 Even the most talented actors sometimes feel burdensome acting in a historical drama due to its particular tone of speech and difficult vocabulary. Moreover, many actors and actresses find it challenging to understand historical characters and portray their personalities and stories through his or her own reinterpretation.

In the drama, Suzy plays the role of martial arts trainer Dam Yeo Ul, who sports better martial arts skills than any other man at her gym. Through this character, Suzy will transform from her usual innocent-looking girl image to a charismatic female warrior. In the recently revealed trailer of “Gu Family Book,” Suzy flaunts her sword-handling skills in a blue martial arts outfit and a top knot.

Kara’s Han Seung Yeon will be starring in SBS “Jang Ok Jung,” rivaling Suzy in the same time slot, starting on the same day. “Jang Ok Jung” aims at portraying Jang Hee Bin, who is historically known as a femme fatale with evil and selfish intentions and ambitions, as a fashion designer in Joseon Dynasty. In “Jang Ok Jung,” Jang Ok Jung starts out her career in the palace as a designer who makes apparels and beddings for the royal family.

Han Seung Yeon plays the role of Sookbin Choi, who enters the palace as a maid for the royal family and ends up being one of the most powerful concubines in the palace with her son as the king. She meets and gets help from Jang Ok Jung (played by Kim Tae Hee) as Queen In Hyun’s maid, but later becomes a villain and sides with Queen In Hyun to drive Jang Ok Jung to the corner.

2AM’s Im Seulong, who’s already been in drama “Personal Taste” and film “26 Years,” is cast in upcoming KBS drama “The Fugitive of Joseon” to play Prince Lee Ho, who is unable to trust anybody and lives in anxiety because he has been getting death threats since the moment he was born. He will be in conflict with his stepmother Queen Moon Jung (played by Park Ji Young), who will do anything and everything it takes to make her biological son and Lee Ho’s half-brother Prince Kyungwon the King.

The biggest reason why idols challenge themselves by taking roles in historical dramas is to prove that they got what it takes to be actors and actresses. Although many idols expand their comfort zone to acting, the public’s reception of the transition isn’t all welcoming since idols often get their roles not based on their acting skills, but based on the size of their fandom and popularity. While some idols successfully prove that they are as talented as other actors, the other unfortunate ones get sharp criticisms on their lack of talent in acting. Even if an idol-actor or actress proves his or her talent in acting, it is really difficult to get rid of the “idol” name from his or her title.

Another big reason for idol-actors and actresses to delve into historical acting is to change their public image. As idols, they appear mostly on music and variety entertainment programs to promote themselves and their songs. As a result, they are perceived as lighthearted, young, and showy. By wearing traditional costumes instead of extravagant stage outfits and speaking in series and dignified manners in historical dramas, these idol-actors and actresses are trying to show a different side of themselves to the public and fans.

Han Seung Yeon voice her hopes to appeal a different side of her at the recent press conference of “Jang Ok Jung.” She said, “The public sees me as this cheerful girl and because everyone expects that of me, I’ve had some hard time keeping up with that delightful, bright, always-smiling character. However, I hope to show everyone that I’ve got different sides and characters within me through this challenge of historical drama.”

An anonymous official of the broadcasting industry commented, “For any actor, historical dramas are like double-edged swords. It could work in one’s advantage, showing his or her talent. But as a genre, it’s difficult to digest, which means bigger risks and more chance at getting criticized if they do anything wrong. Since it’s the first time for all three of them–Suzy, Han Seung Yeon, and Im Seulong–to act in a historical drama, it’d be interesting to see what kind of reviews they receive from the public and critics.”