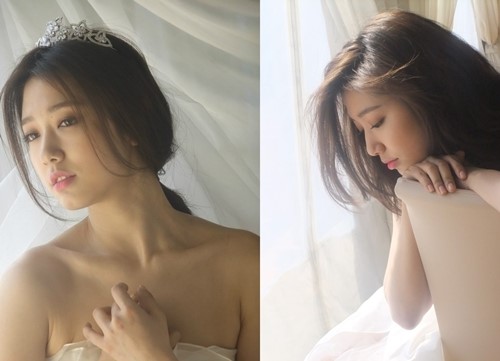 Recently on an online community bulletin board, two photos were released under the title, “Park Shin Hye’s unedited wedding photos uploaded by her hair salon.”

The pictures were taken during the photoshoot for the April issue of the wedding magazine “My Wedding.” In a beautiful white wedding dress, Park Shin Hye looks graceful and elegant.

It was later revealed that these photos were taken as a test by the hair and makeup artist. Despite the fact that they were not taken by a professional photographer, and that they were not photoshopped, Park Shin Hye still looks perfect in the pictures.

Fans that saw these photos admired, “Park Shin Hye always seemed like a young girl, but in a wedding dress, she looks mature and beautiful,” “She looks sexy too.”

Park Shin Hye
My Wedding
How does this article make you feel?