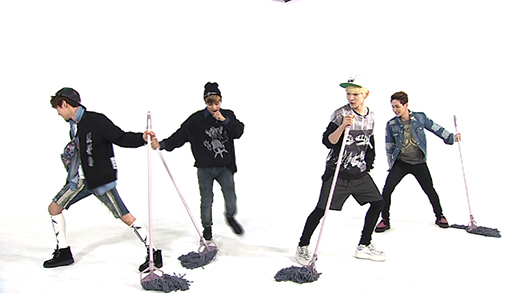 SHINee performed their hit single “Dream Girl” without standing microphones. Instead they used mops! Although they looked funny, they still managed to make it cool! The funny parody of themselves was done on the cable channel MBC Everyone. They appeared on the show “Weekly Idol” and used mops instead of standing microphones.

At first when the SHINee members were surprised when they were giving mops, but soon they started to use them and practice passionately. Onew showed off his signature microphone spin and all the other members began to follow suit.

The SHINee members told each other, “I think we can now start to use mops instead” and “I think we are pretty good.”

The episode of “Weekly Idol” with SHINee will broadcast on April 3.