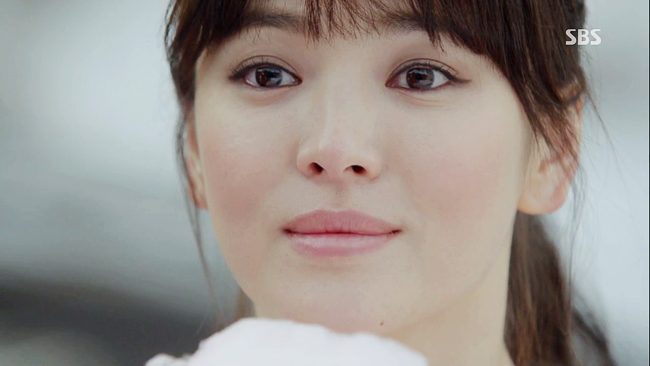 Interview with Song Hye Gyo Part 1: “I Wanted to Continue Feeling the Torment From That Time…”

Just having recently wrapped up one of the most talked about dramas of the season, Song Hye Gyo sat down for an interview at a cafe where she shared about her involvement in “That Winter, The Wind Blows.”

Q: How did you feel after receiving lots of praises?

Song Hye Gyo: It’s been awhile since I received praises from people, so it felt really good to hear and I was excited. Because I was acting a blind person, I dreaded the drama’s premiere, but I was so relieved and happy that the public’s reaction was good. Whenever I monitor myself, I always feel like I lack many things. The good result this time was a mystery-like feeling that came out from me, which I never showed beforel.

Q: This is your second time participating in writer Noh Hee Kyung’s work. Did she have a big part in your decision to take this project?

Song Hye Gyo: To be honest, when I heard that teacher [Noh Hee Kyung] was going to do a remake, I didn’t know why she would. She has her own color.. however, Noh Hee Kyung said that she will give a completely different feeling and that she will reach out to the public. That’s why I decided to trust her and director Kim Kyu Tae and go with the project. Teacher said that she drew Young’s character from the character Jun Young’s cynical expressions from the drama ‘The World They Lived In.’ I researched and studied every scene to make up for the parts that were missing from the original. Teacher wanted to fix the parts that weren’t perfect from the original so I think she wanted to recast the characters in the drama.

Q: I think it would have been emotionally difficult to act out the character of a blind person loving her older brother.

Song Hye Gyo: “It was a really difficult project. I don’t have such an up-and-down personality, but I experienced some of that during this project. Seeing myself acting that way was new and there were times when tears wanted to come out when I’m just talking. It was always bittersweet whenever a project ends, but it was different for “That Winter, The Wind Blows.” I wanted to continue feeling the torment from that time and it was hard saying goodbye to this project. I think that the writer, director and all the actors felt that way.

Q: Did you hear that you look good with Jo In Sung often?

Song Hye Gyo: Even I saw the screen and thought that we look good together. Since he’s tall and I’m short, it feels like a romance comic and Young seems loveable. The only reason why I was “Oh Soo lovesick” because I didn’t see the other actor in person, but watched them through broadcast. When I saw Oh Soo’s acting, I thought “so his gaze is like that.” I thought “there’s no guy like that in the world” and became like other female viewers who watched the show. In Sung had to carry me and pick me up in many scenes, but I heard from staff that his hands were shaking when he ate his food that day. I’m sorry. (Laugh)

Song Hye Gyo
KPLG
That Winter
The Wind Blows
How does this article make you feel?