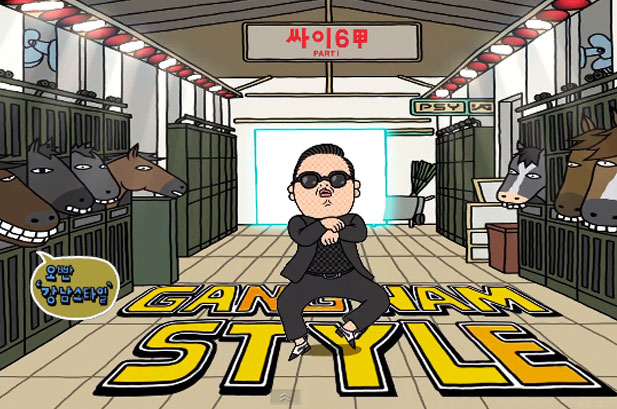 [Editorial] The Current State of Hallyu in the US

I’m not going to pretend to be an expert on who’s doing what and with whom on the Hallyu map. But we’ve tasted success through PSY, and I say we because by it’s due to fans of Korean pop sticking the proverbial foot in the door. When Korean pop fans subbed and uploaded music videos on Youtube, not only did that make it available for people like me to check it out, that also got all the agencies to make official Youtube accounts and post everything from talk show clips to extended T-ara‘s 20-minute music videos. Which led to Gangnam Style being uploaded to Youtube, which led to Gangnam Style playing all over the radio. I don’t know how many of you listen to Latino stations but imagine this: I’m tuning into a station where all the songs are in Spanish, all the announcers speak Spanish, and all the commercials are in Spanish. It’s really Spanish. And Korean comes blasting out of my speakers: “OPPA GANGNAM STYLE!” Now, that’s what I call Hallyu.

How many artists of any Asian ethnicity do you hear on the radio in the US? Besides artists like Ne-Yo or Nicki Minaj (nobody’s going to see Minaj’s Indian heritage just by looking at her), I count the grand sum of three: Jay Sean, Far East Movement, and PSY. The scarcity could be due to Asian parents wanting their kids to be doctors, lawyers, or engineers but this could also be due to stereotyping. Anyway, my point is that very few Asian artists have made serious hits in the US pop industry, and of those, PSY’s the only one representing Korean pop.

Se7en, BoA, Wonder Girls, JYJ, and Girls’ Generation have all released songs in the U.S. but none of them did much to advance Hallyu. Yes, they charted maybe on iTunes or some subsection of Billboard and yes, they performed all over the place, did interviews, and did all the PR that they could schedule but none of it worked. You know how all their concerts sold out? Those were all K-pop fans. You know how they got millions of views on Youtube? Those were mostly K-pop fans, too. The Wonder Girls tried the hardest of all: they toured with a teen pop act, got a movie, and released an English-only song featuring Akon. I’ve got to hand it to JYP, the guy knows how to network. However, he doesn’t understand the game and neither do any of the other agencies.

Korean talent agencies love formulas. They want to know what packaging they need to make a star. They hire vocal trainers and choreographers because if the trainees are lacking in some area, it can be trained. They mix and match trainees to get as close to a dream team as they can. They schedule interviews and variety show appearances to garner interest. They hire songwriters and producers to make catchy hit singles that kind of all sound the same but are guaranteed to make the performers look good. Did you guys hear the singles that SBS released for the 2012 Music Awards, The Color of K-pop? That’s as gimmicky as it gets. Muse had the same coloring as an IU hit and This Person bore an uncanny resemblance to SISTAR‘s Alone. You know it’s not the exact same melody but it sounds similar because the style has been engineered to suit the concept. Every aspect of K-pop has been industrialized.

The agencies send their artists to the US and expect that by doing the usual PR, the singers will generate interest, and by trying to get associated with big-name acts and producers through collaborations, the singers will imbibe qualities from US successes that will allow them to hack into the market. That’s not how it works in the US. Singers in the US don’t get famous because they’re in the magazines, they get into the magazines because they’re famous. Singers in the US don’t get famous because they work with famous producers, they have to prove themselves and subsequently attract attention to get the pros on board. I think a lot of people saw how Usher took Justin Bieber under his wing and thought that it was the association that made him famous. This is incorrect. It was the commitment that the management undertook to set him up for success, and that commitment is something that a Korean agency can’t procure through mere networking.

I wasn’t around for Se7en’s debut but here’s what I think happened with the others. BoA’s US songs were catchy-ish but fell miserably short for someone being marketed as the Best of Asia. She’s the classic manufactured star as in she can perform anything but not every song will show off her best, plus her outdoor performances were always packed by old fans—no space for newcomers. The Wonder Girls picked the wrong act to associate with. No offense to the Jonas Brothers but their fans were in a young, narrow age bracket. Another misstep was the movie with Nickelodeon (in which they apparently learned to say, “fo shizzle.” Really, now?). Teddy Riley thought that Girls’ Generation would see better success than the Wonder Girls but as I’ve heard them on the radio zero times, I would say that neither succeeded at all. One glaring weakness of their album The Boys was that there was no continuity whatsoever, which in turn is due to the fact that Girls’ Generation have yet to mature into some kind of musical identity. As for JYJ, they don’t even know English.

The one common problem was that these singers only worked hard instead of both working hard and working smart. They didn’t play to their strengths, plus they had too much of the PR and themed costumes. They should have gone straight to the radio and bought up all the airtime that they could and have the music, at its best, sell itself.

Notice: PSY had no plans to bring Gangnam Style to the US. There was no grand marketing scheme and Gangnam Style is just one of many of songs showcasing PSY’s unique taste. It went viral all on its own and we’re still not sure exactly how that happened. After that, he got featured all over the place and his notability shot through the roof. Is it possible to recreate that explosive popularity through “hard work” instead of luck? Artists planning future US forays can only hope.

A second major problem was weak songs. Debuts in the US need to be catchier and stronger than new songs by veterans. If you listen to the radio, Maroon 5, P!nk, and Usher do whatever they want because they’ve been established but new blood is always interesting because if it’s not interesting, it doesn’t get air time.

So. What will the future of Hallyu look like, anyway? One thing that we’ve learned from Gangnam Style is that something completely unexpected may happen. What is being planned is 2NE1‘s debut with the mentorship of will.i.am, Rania‘s debut with the help of Snoop Dogg, and PSY’s follow-up single titled Gentleman, fingers crossed. Will.i.am seems to be very invested in 2NE1 as has not been the case for other US debuts so it’s really up in the air how they will fare (but so far, it looks good). Rania is something of a dark horse as they’re not the biggest thing in Korea, which could be a plus or a minus. I don’t see any reason for PSY’s new single not to ride in on Gangnam Style’s popularity but there’s still going to be some agitation over it, sort of like wondering whether or not Kim Yuna will take a second Olympic gold in Russia next year.

There are also projects like the short comedy skit with f(x) and Anna Kendrick (Pitch Perfect). I hear that they’re planning to do more collaborations to help promote “K-pop stars” and “American stars” together. This is a good idea but I have a real bad feeling that it’s going to be very badly executed. When I saw the skit, I didn’t think it was funny. I think I like Kendrick O.K. and between us, I think SM Entertainment should have put the US debut on f(x) instead of Girls’ Generation because f(x) would have been less awkward in interviews and talk shows. But the actual skit that got put together made me cringe, both because the majority of f(x)’s English lines were poorly delivered and because I don’t like the way the word “K-pop” sounds. It would have made more sense if they turned it into some kind of Pitch Perfect spinoff skit.

Another point I want to touch on is the image of Korean pop. So far, I’ve been kind of avoiding the term K-pop because there’s a certain stigma to it. One of the things holding Koreans back from success is this idea that K-pop is one genre, and a really manufactured genre at that. It’s sort of like the idea that all Asians look alike. To succeed, a Korean artist should be able to shed the “K-pop” label and make their own brand. For example, PSY’s the crazy guy with the horse dance. 2NE1 could be the sexy-tough rapper-singers who redefine girl group pop. If they get tied to an image as the K-pop group that wants to make it in the US, that’s going to be detrimental to their success at growing their popularity past their existing fanbase. One of the reasons that I didn’t like the f(x)-Kendrick skit was that the humor was too conservative and wasn’t ready to have K-pop artists dissing K-pop. It’s true that most Korean artists have been trained up but people want to see that the singers are outgrowing the system and taking matters into their own hands.

I don’t want the US contemporary hits radio to turn into a giant Korean pop cesspool but I do understand that these groups dream of standing at the top of the world and to do that, they’ll have to conquer the US market. The heart of the US market lies in its radio and the way to break into the radio is through the strength of the songs. When I hear it on the radio, that’s when I’ll know it’s a success.