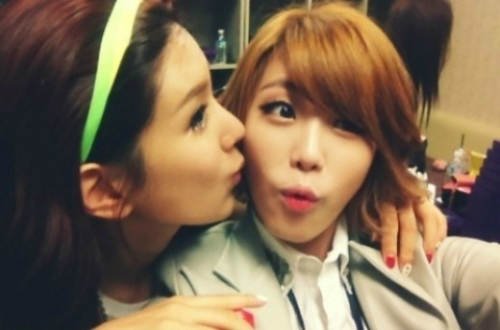 On April 5, Secret’s Hyosung left a message on her twitter, “Happy birthday to you. I would like to wish Ji Won, whom I love, a happy birthday. I will sing it to you live later! Congrats!”

Jun Hyosung and group SPICA’s Yang Ji Won were members of a prospective girl group Five Girls. Training for approximately two years with three other members, G.NA, After School’s Uee, and Wonder Girls’ Yoobin, Hyosung and Ji Won were planned to debut as Five Girls in 2007. However due to the financial problem of their agency, the group never made it.

However, although they became members of different groups, Hyosung and Ji Won still remained good friends.

Netizens that saw this message admired, “It is nice to see that they are close,” “All the members of Five Girls are beautiful and kind,” and “I hope they remain friends for a long time.”

Hyosung
Ji Won
Secret
SPICA
KPLG
How does this article make you feel?