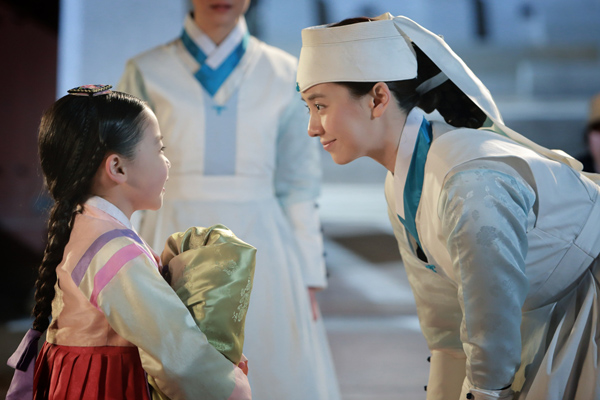 The revealed images show Song Ji Hyo looking into Kim Yoo Bin’s eyes affectionately, meeting her at her eye level by bending her knees, and Kim Yoo Bin looking looking up at Song Ji Hyo with a hint of smile on her face. One cannot help but to smile at this heartwarming chemistry between the two actresses.

In “Heaven’s Mandate,” Song Ji Hyo plays the role of Hong Da In, an in-palace nurse who clashes with in-palace doctor Choi Won (played by Lee Dong Wook) who appears to have no talent or passion in medicine. However, as the revealed still images show her smiling so lovingly at Choi Won’s daughter Choi Rang (played by Kim Yoo Bin), it arouses curiosity in the relationship among three individuals. Choi Rang is fascinated by Hong Da In’s physical and inner beauty and plays the role of cupid between her and Choi Won.

According to several on-site sources, Song Ji Hyo has been taking care of Kim Yoo Bin on filming sets like she is her youngest sister. Kim Yoo Been looks up to Song Ji Hyo as a big sister figure in return.

“Heaven’s Mandate” will take over “Iris 2“s time slot and will be on air starting on April 24 at 10pm KST.