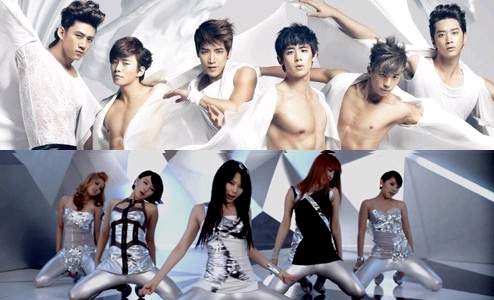 Male and Female Idol Groups Set for May Comeback

May is going to be month jam-packed with comebacks from your favorite idol groups like 2PM, MBLAQ, 4Minute, and After School. See which male or female groups (plus one veteran idol) are rumored or set to make their long awaited comeback in May by the industry insiders.

2013 started with the reign of the pretty boys with SHINee, INFINITE, and Teen Top leading the pack but in May we are going to see more masculinity, powerful choreography, and (hopefully) more chocolate abs. K-Pop’s beastly idol groups 2PM, BEAST, and MBLAQ have set their comeback dates in May.

2PM was the first male group to announce their comeback with several mysterious video teasers. Their last album was “Hands Up” and although the group has been actively promoting in Japan since then, it has been two years since 2PM has promoted in their home country. Now that they wrapped up their Asian tour with their last concert in Thailand, the group is more than ready for their long awaited comeback.

BEAST is the second group looking at a May comeback. We last saw the group together for “Midnight Sun” in July of last year. Since then the members have been working hard on their individual activities such as Yang Yo Seob’s solo album. There is a chance that the comeback may be pushed back to due to those individual activities, particularly Yoon Doo Joon and Yong Joon Hyung’s acting commitments, but since the group has been making their final album preparations, a May comeback is a safe bet.

Lastly, we will also be seeing MBLAQ in May. They promoted “This is War” in March of last year and have been busy with their Japanese promotions (like the Japanese version of “Mona Lisa”) or their individual TV activities. While nothing has been officially announced yet, the word on the street is that the group has already chosen their title track. Since Joon will be wrapping up his “IRIS 2” activities soon, the group should also be finishing up their album preparations soon.

May is going to a competitive month for female idol groups, but that is only good news for K-Pop fans. 4Minute, T-ara, Secret, and After School have all set their eyes on a May comeback but that is not the only common factor they share. All four of these groups debuted in 2009, which means that they will make their comeback in the fifth month of their fifth year (If either 2NE1 or f(X) also makes their comeback then it would be FIVE groups in the FIFTH month of their FIFTH year. Am I asking for too much?)

T-ARA was one of the first groups to officially announce their May comeback. It has been seven months since they wrapped up their promotions for “Sexy Love” but the group is coming back with their first sub unit, T-ara N4. Eunjung, Hyomin, Jiyeon, and Areum make up this new group.

4Minute will also be making their comeback this May. After “Volume Up” in April of last year, HyunA has been busy with her solo activities and sub unit 2YOON released their country song “24/7.” Now the members will reunite and make their May comeback as a group.

Secret is also set for a May comeback. The members have been preparing for this comeback, especially via SNS. Secret fans will be happy to hear about a new album since their last song “Talk That” was sadly cut short due to their car accident.

After School will be joining the other groups in May. They last promoted in June 2012 with “Flashback”, although sub unit Orange Caramel had been busy since with “Lipstick.” With their unique “graduation” system, who knows what we can expect from the fifth year of this sexy girl group.

They are not five year old female groups but Sistar and veteran idol Lee Hyori are also looking into a comeback in the same month.

Looks like May will be a great month for K-Pop fans! Which group’s comeback are you looking forward to the most?