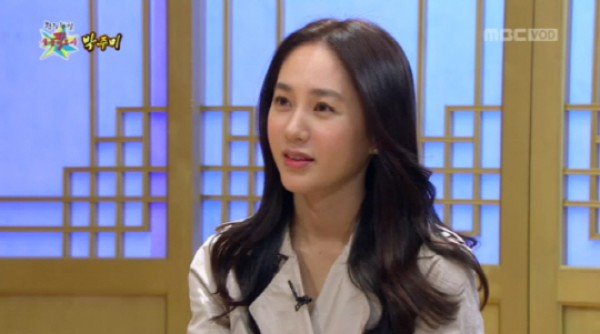 Actress Park Joo Mi appeared on the most recent episode of MBC’s “Golden Fishery – Knee Slap Guru” as a guest and talked about her skincare strategies. When asked about how she still looks so youthful, Park Joo Mi wittily responded, “First, due to technological advancements in lighting and secondly, thanks to technological advancements in cosmetic products. Did you know that there’s something called the HD powder?”

When MC Kang Ho Dong asked her if she’s gotten any plastic surgery done, she seemed a little taken aback and mumbled. She continued to share her anti-aging secrets anyway saying, “I use eye cream anywhere I think I see wrinkles. So first, I put some around my eyes, and then on the parentheses-wrinkles around my mouth, and then on my lips. I still have to put eye cream on, but what is most important is to start applying them regularly before you get wrinkles. I’m not trying to ‘spread the word’ or anything like that, but I know I’ve benefited from this strategy in the past 20 years.”

Finally, Park Joo Mi admitted to having received some Botox treatment. She explained, “When I was done filming’Believe in Love,’ I got one Botox treatment between my eyebrows. But the problem was that if you get it there once, the balance is off. So you end up having to get Botox all over your face.

Kang Ho Dong did not stop questioning her. After a long period of persistent questioning, Park Joo Mi wittily and adorably admitted, “Botox…two shots?” signaling two with her hand and smiled at Kang Ho Dong. She then defended herself, “The doctor told me the key to looking natural is diluting a little bit of Botox with water and injecting it lightly. Bam, bam, like that. If you get a treatment like that, these big wrinkles will go away instantly.”