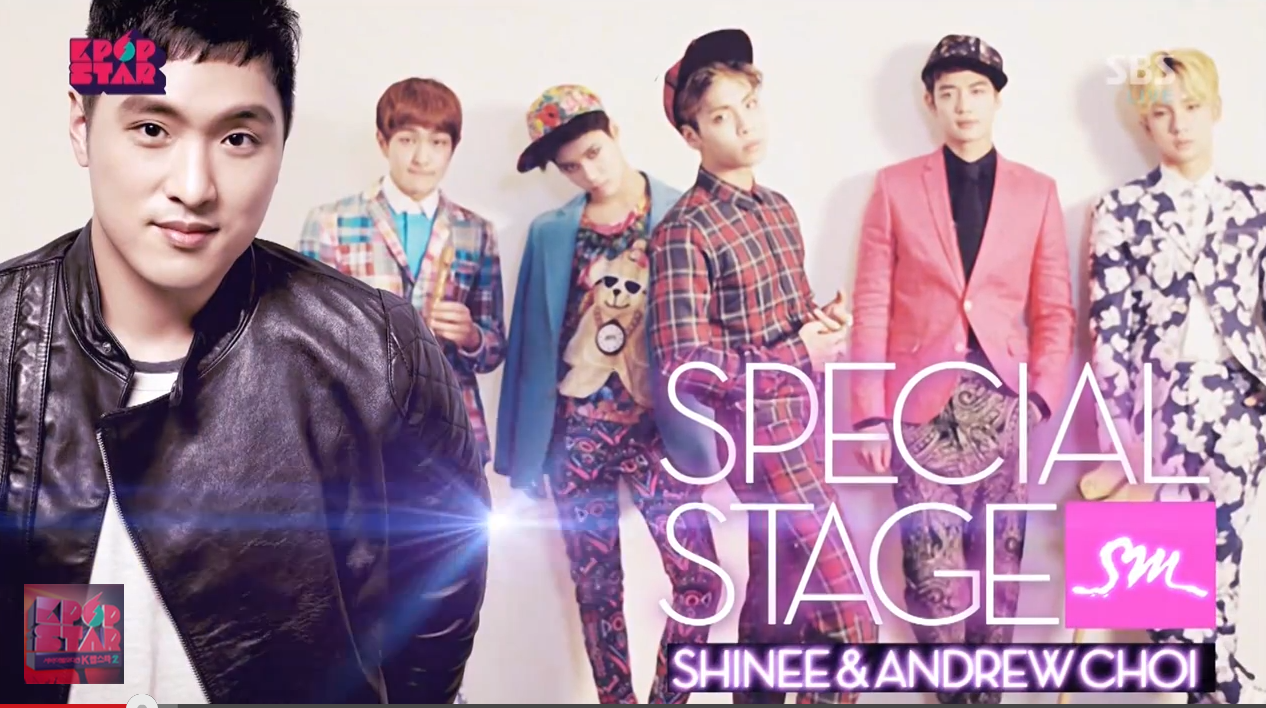 ‘K-Pop Star 2’ recently had its season finale, but The One Shots‘ writer Saphy still has a bone to pick with the judges after an injustice was done to one of the Top 3 contestants. This week, she explains why Andrew Choi’s special SM stage cost him the spot she thinks he deserved in the finals this season.

In case you didn’t know, the crazy talented brother-sister duo known as Akdong Musician recently nabbed the win on ‘K-Pop Star 2’ after a grueling battle with the wonder kid, Bang Yedam. It was pretty much known from the get-go that Akdong Musician would be a shoo-in for the finals, so not much of a surprise there. But as an avid fan of this awesome talent audition reality show myself, I am enraged on behalf of the third-place contender, Andrew Choi, whom I believe should have been the one to take on the duo and give them a real run for their money. And it’s all because of a poorly designed special stage.

The battle among the Top 3 contestants consisted of two parts: a solo stage and a collaborative stage with artists from the Big 3 companies that each contestant had been cast into. The different approaches each company took to design these collaborative stages are what may have possibly cost SM representative, Andrew Choi, his chance to go head-to-head with Akdong Musician, while securing a spot for YG‘s little prodigy, Bang Yedam, in the final round. For now, let’s just say outshining your own contestant isn’t a winning strategy, and you’ll see what I mean soon enough.

Akdong Musician easily held their own in their special stage with a remixed rendition of miss A‘s “I Don’t Need a Man,” featuring miss A’s very own Jia, Wonder Girls‘ Ye Eun and 2AM‘s Jokwon and Changmin. They focused solely on putting on a great show–so much so that I forgot for a second that it was a competition and not a JYP Nation concert. They actually fit in quite well with the JYP family, so while the duo remains undecided on which company they will sign with, this performance has me crossing my fingers for JYP.

Meanwhile, I have always respected YG, and after the way he conceptualized Yedam’s performance, I somehow found even more ways to respect the man. The simple design of the “Bad Boy” stage with only two singers and some chill back-up dancers was way less distracting and allowed the audience to focus on the contestant at all times. We all know his partner Taeyang is a multi-talented entertainer who lights up every stage he stands on. He could have easily stolen the show away from Yedam and relegated the kid to being an accessory, but he didn’t. In fact, he held back and always made sure Yedam was the focus. He matched his strides and constantly interacted with him, never straying too far away, yet adding just the right amount of star power to make people fall in love with this truly special stage.

But when I saw Andrew’s stage, I became so angry. I just failed to understand just why SM felt the need to bring in all five members of their incredibly popular group SHINee, especially when their 33-year-old contestant probably has no interest in joining a boy band anytime soon. In fact, before I go on and point out just what went wrong, I must mention that the man is not exactly a rookie. He’s actually one of SM Entertainment’s most talented composers, having written songs for TVXQ, EXO and SHINee, including the song for his special stage, “Beautiful.” He even recorded the guide vocals for BoA‘s “Only One.” But based on the way SM treated him as an accessory in his own special stage, one might wonder whether he has even earned the company’s respect after composing for their super groups these past few years.

Starting from those behind-the-scene snippets, before the performance had even begun, you could just feel how Andrew’s synergy with the members was a bit off. There’s no denying that a generation gap here played a role. I mean, I wouldn’t be surprised if Taemin calls Andrew ahjussi behind closed doors. And not only was there that lack of chemistry, but there was also the sense that SM was trying to make Andrew fit into their cookie-cutter bubblegum pop style that has been pervading K-Pop for ages now. Andrew is too old to fit that mold. His talents lie in his vocal and writing abilities, so why weren’t those capitalized on?

Add on the fact that Andrew has a much more reserved and timid personality. Placing him on a stage with the charisma-oozing-from-their-pores SHINee was bound to make him fade into the background. Before his piano solo had even ended, fans caught a glimpse of the superstars appearing on stage and immediately started screaming, practically drowning out his last few verses and ruining his only time to shine. And then, what was up with those formations? Like I said, he’s reserved and timid, not someone who’s about to break out his dancing shoes and jazz hands. I was not aware that this was another music show performance for SHINee, featuring their sixth long (and thankfully) lost member, Andrew Choi. Bringing in that SHINee arsenal clearly had more promotional gain for the currently promoting boy band than the contestant. Plus, the task of competing for camera time and outshining five experienced performers is just about impossible for one man, even if he is über talented himself, so naturally, given his little amount of screen time and lack of verses, I basically forgot that he was the contestant.

Being the talented composer that he is, he could have easily rearranged his own song into a ballad and continued singing it on that piano, like he had started out doing. Then, they could have brought in one SHINee member to accompany him. My vote would have to go to Onew for his ability to maneuver between ballads and upbeat pop so easily. His personality and style would actually complement Andrew’s quite well, while their voices would be in perfect harmony. The potentially beautiful performance would have fit Andrew’s style much better and allowed him to show off the fact that he has superior vocals when compared to the inexperienced and still developing Yedam.

For ‘K-Pop Star 3,’ I hope the judges will plan collaborative stages that make more sense. This audition show shouldn’t be used as a platform to show off the talents of these entertainment companies’ groups. We already know that these established groups have tons of talent, and we already have the weekly music shows to show us that. It should be all about the contestants, who should be allowed to give it their all and be judged at their best.