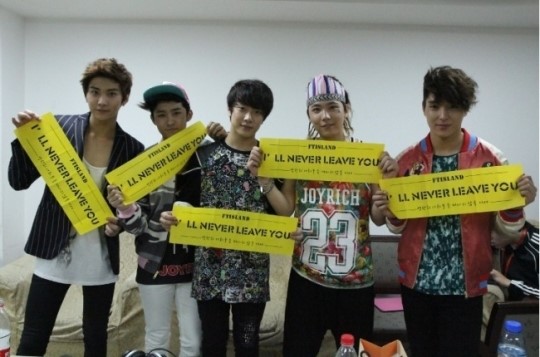 Five -member band FT Island successfully wrapped its Beijing stop of the “Take FT Island” Asia concert tour series. According to reports in local news agencies, the band rocked their fans on their first solo concert in the Chinese capital on April 13.

Reports further said FT Island members were all in their best possible condition and led the fans on an energetic musical journey for the evening. They drew support from the enthusiastic cheers and gave out a performance that the fans very much enjoyed. Song Seung Hyun impressed the crowd with his skill in Chinese, product of his diligent study of the language. Lee Jae Jin, meanwhile, said, “Thank you for enjoying the songs.”

The crowd sang along with vocalist Lee Hong Ki to FT Island hits such as “Hello Hello” and “I Wish.”

Banners with “FT Island, I’ll never leave you” were also flashed. All members, including leader Choi Jung Hoon and drummer Choi Min Hwan, came together for the encore.

Apart from their performances, Chinese media praised the band for their fluency in the language, particularly Song Seung Hyun.

The Beijing “Take FT Island” concert followed their January 19 concert in Shanghai in China. The concert tour is set to go on Singapore and Hong Kong in July and August, respectively while the band will continue on with its Japanese activities in June.