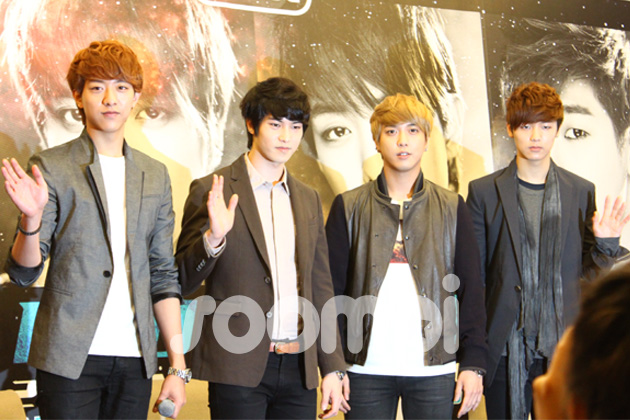 CNBlue held the Singaporean leg of their “Blue Moon World Tour 2013” on April 13. Before the concert, the group prepared time to meet the Singaporean media at a press conference held at the Grand Copthorne Waterfront hotel on Friday, April 12.

Even though the members Jung Yonghwa, Lee Jonghyun, Lee Jungshin, and Kang Minhyuk looked worn out from their hectic schedule, the four guys were their usual bubbly selves and never failed to brighten up the room with their boisterous laughter.

The band also brought with them five sets of traditional sweets from Korea to be given away to the reporters who were going to ask questions. The media was very impressed as it was the first time Korean artists had prepared gifts for the media. Wow! So sweet of them (pun intended)!

The host of the press conference, DJ Ah Ken from Radio 1003, brought up the report that many artists had attended CNBlue’s concert in Taiwan, and specifically mentioned that Singaporean composer and singer JJ Lin had visited them backstage, to which Yonghwa immediately chipped in, “Oh, JJ’s my friend!”

Yonghwa added, “JJ actually gave me this t-shirt that I’m wearing right now. We heard he’s from Singapore and I think it’s a token of friendship.”

Q: CNBlue started out performing on the streets and train stations in Japan but the group is now on a world tour. What do you miss about those early days?

Yonghwa: We are very thankful that people recognize us now, but of course when we first started out, not many people recognized us. We are very grateful and feel privileged to be where we are at the moment, but we still hope that maybe one day, we can still play in the streets for fun. We could probably perform with masks on our faces to hide ourselves!

Jonghyun: Because of those hard times, we appreciate more of what we have at this moment. And thanks to our fans, we are here now.

Q: We know that all of the members have been very active in dramas. Is there a particular role or character that you look forward to playing in the future?

Yonghwa: I believe that acting is part of the performance as a singer, so it helps me to express myself in terms of music. Despite the past two dramas that I have done, I believe I could play a brighter character for the next acting project that I will be involved in because I’m naturally a very bright, cheerful, and bubbly person. I’m a funny guy!

Minhyuk: While we are in the midst of a world tour right now, I do receive a lot of scripts and synopses. But right now, I am focusing on the world tour. If there is good acting opportunity for me in the future, I will definitely take it.

Jungshin: If the opportunity arises, then I would love to take up a new role in a drama or movie.

Q: Yonghwa has been recognized as a singer-songwriter, so will he be writing songs for other singers apart from CNBlue and his label mates? And when he does write for his label mates, does he take on a different sound compared to CNBlue?

Yonghwa: I would love to write songs for other singers but at this moment, I have not written any. When I do write a song for someone outside of the company, I will write songs with a different sound from CNBlue so it fits whoever I will be working with.

Q: Have you prepared any special stages for the Singaporean fans and would you also consider switching your band positions for your live performances?

Yonghwa: For Singaporean fans we will focus a lot on our new album “Re:Blue.” We don’t really have a special stage that includes position changes but maybe we can consider that. Particularly for this concert, you will be hearing a lot of songs from our new album so you won’t be seeing us changing clothes many times during the concert. Since we are not a performance-based group but a band, we want to focus on our music only.

Before the press conference officially came to an end, the host taught CNBlue Singlish by telling them to attach the sound “lah” to the end of words and phrases. All of the members picked it up effortlessly and immediately showed it off, inviting much laughter from the media. As they exited from the room, Yonghwa looked back and shouted, “I love you lah!”

Special thanks to One Production for inviting Soompi to the press conference.