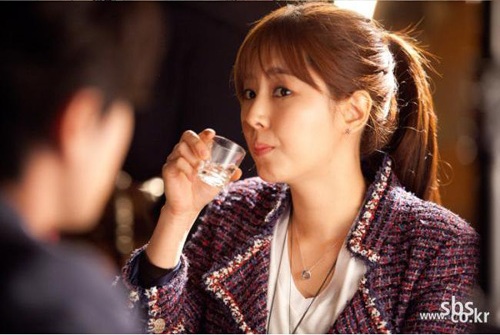 Pictures were revealed of Han Chae Ah from the set of “All About My Romance.” Han Chae Ah is appearing on the drama as the political reporter named “Ahn Hee Sun.” On episode 3 of the drama that was broadcast on April 11, Ahn Hee Sun continued to show her feelings for “Kim Soo Young.” (Portrayed by Shin Ha Kyun)

In the episode, she tried to give a good night kiss to Soo Young and also tried to get his attention by wearing a sexy leather skirt.

A representative of the drama stated, “Ahn Hee Sun’s character is very refreshing and unique. However, Han Chae Ah’s personality is bright and she makes everyone around her happy. Her personality is so bright that this role fits her perfectly. She is expressing the character with a lot of charm.”

“All About My Romance” broadcasts every Wednesday and Thursday at 10pm. (KST)

Han Chae Ah
KPLG
All About My Romance
How does this article make you feel?