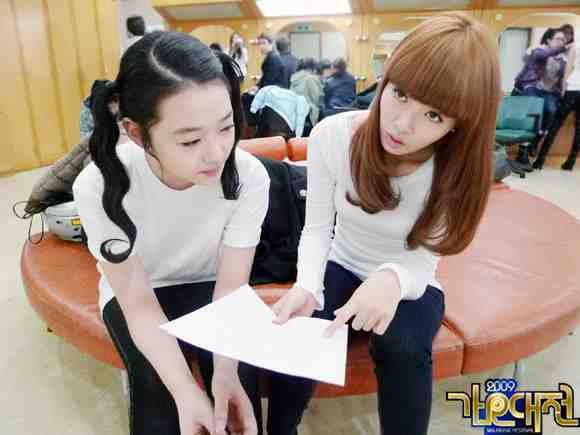 Who Wore It Better: Innocent Sulli vs. Sexy HyunA

It’s time for another round of Who Wore It Better and this time, it’s between f(x)‘s cutie Sulli and 4minute‘s sexy diva HyunA.

Both Sulli and HyunA recently sported the same t-shirt with a pair of lips printed on the front.

Sulli wore this shirt for an advertisement photo shoot. She looks natural and youthful, especially with her hair tied back, which showed off her long and graceful neck. She pulls off the innocent and cute as she wears the t-shirt in a casual way with feminine pink makeup.

On the other hand, HyunA sports the t-shirt with brown wavy hair tumbling down and strong, black eyeliner. This created a totally different look from Sulli’s as HyunA displays her signature sexiness. HyunA also pulled the t-shirt down one shoulder for that sexy edge.

Netizens who saw this comparison commented, “Innocent Sulli, sexy HyunA – I like them both,” “Both celebs can pull off any outfit,” “Their bodies are pretty so the clothes look good too,” “I want that t-shirt too,” and more.

Who do you think wore it better, Sulli or HyunA?

4Minute
f(x)
HyunA
Sulli
Who Wore It Better?
KPLG
How does this article make you feel?