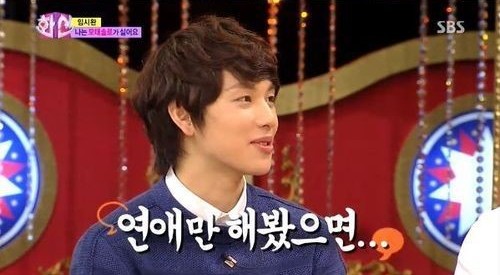 ZE:A’s Siwan Laments Over His “Single Since Birth” Status

ZE:A‘s Im Siwan recently made a comment that truly showed how much he wants to shed his “single since birth” status!

On April 16, Im Siwan was a guest on an episode of the SBS talk show, “Hwashin” along with Jay Park, Choi Phillip, JK Kim Dong Wook, Kim Young Ok and Kim Soo Mi. One of the discussion topics of this episode was “how to put the ball in my court” when dating or in a marriage life.

During the discussion, Siwan said, “I don’t care if the ball isn’t in my court. I just want to date.”

He continued, “Last year, I confessed that I have never dated a girl in my life. Afterwards, that ‘single since birth’ status kept chasing me around wherever I went. Now I even hear that people are asking if there’s something wrong with me. Now I feel really cautious and anxious.”

Then Jay Park commented, “I think it’s a lie that you’ve never been kissed. You’re so good-looking that you could probably get away with anything, anywhere,” which caused everyone to laugh.

Recently it was reported that Im Siwan and Kim Hee Sun have a special friendship, which was how Im Siwan was invited to “Hwashin” in the first place!

Im Siwan
ZE:A
KPLG
Lim Siwan
How does this article make you feel?