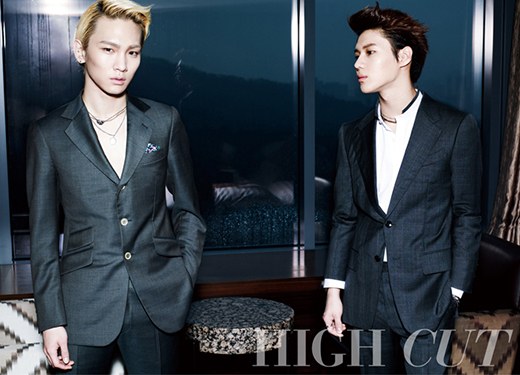 Victoria joined this photo shoot to take Jonghyun‘s place due to his nose injury absence. Victoria was the heroine of SHINee’s debut music video, “Replay.”

The photos showcased SHINee’s sexy masculinity as they are decked out in sharp looking suits. A photo of Minho and Victoria locked in a tight embrace with smoldering eyes also caught the attention of the public.

During the interview, Victoria reminisced the days of the “Replay” music video shoot. She said, “Looking back, I realize that all of them have matured now. Back then, all of the members felt like my cute younger brothers but now they are men.”

The SHINee members commented, “Back then, Victoria wasn’t very good in Korean but now she is so good. It’s the power of the broadcast.”

SHINee also talked about their popular “stand mic” dance for their recent single, “Dream Girl.” Taemin commented, “Before we learned the dance, we worked out to be in shape. The choreographer hyungs would make us do push-ups to warm up and told us, ‘You guys need to do this if you’re gonna do this dance.’ We probably did about 100 push-ups per day.”

Lastly, when asked what the biggest change since their debut five years ago is, Minho answered, “The stage became more comfortable to us and now we are experienced. When we watch clips of us during our debut period, we know it’s us but we were so cute.” Key answered, “For me, I can’t really watch those clips. Because when I do, that old feeling of ‘I can’t make a mistake. I need to do well no matter what’ creeps back up again.”

SHINee
f(x)
High Cut
Victoria
KPLG
How does this article make you feel?