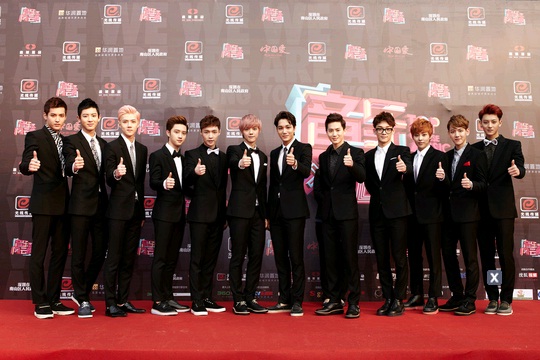 Congratulations to EXO-M! The handsome idol group won the “Most Popular Group” award at the 13th Top Chinese Music Awards on April 14.

The “Top Chinese Music Awards” celebrates artists who are active in the Chinese music industry and is based off the Chinese music charts. This is not the first award for this Mandarin singing group. EXO-M has won “Best Rookie”, “Most Popular Group”, and “Best Dressed” at other Chinese award ceremonies.

After accepting their award, EXO-M’s Korean counterpart, EXO-K, joined them for a special performance.

To celebrate the win, SMTOWN Facebook shared many photos from the event, including backstage and red carpet photos. Check out the group photos below (with more pictures here).

EXO is currently working on their first full album.