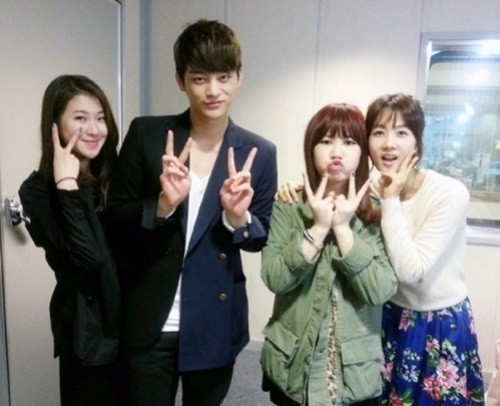 Seo In Guk made a promise on air recently. The singer and actor was a guest on SBS Power FM’s “Park So Hyun’s Love Game” on April 17 with the girls of 15&. In the course of the radio program, Seo In Guk said, “I commit to dancing to 15&’s ‘Somebody’ if they get first place.”

Both Seo In Guk and 15&’s Park Jimin are products of talent programs. Seo In Guk was the grand winner of the first “Super Star K” in 2009. Although his roots are in singing and performing, his career and popularity rose with his successful turn as the lead character in the hit cable drama “Answer Me, 1997” in 2012.

He said, “I have dreamed to get to this point, to be a singer, be on radio and even an actor. But before, when I was competing in ‘Super Star K,’ it was really hard to think about this success because it seemed that I had nothing.”

Seo In Guk is currently promoting his track “With Laughter or with Tears” while 15& are active with “Somebody.”

Seo In Guk
Park So Hyun
K-pop Star
Super Star K
15&amp;
Somebody
With Laughter or with Tears
Love Game
SBS Power FM
How does this article make you feel?