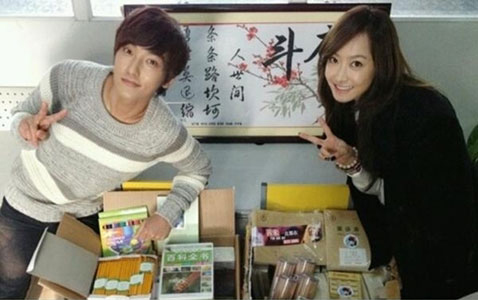 Kangta: “f(x)’s Victoria Is My Ideal Type and I Wanted to Ask Her Out..”

Singer Kangta, who made his debut through legendary idol group H.O.T, picked labelmate Victoria as his ideal type.

On April 19, he made a guest appearance on China Shenzhen‘s popular variety program “Generation Show” where he showed off his fluency in Mandarin.

There was a special corner where fans had the chance to get their questions answered by Kangta. One fan asked, “Is Victoria your type of ideal girl?” He seemed a little flustered, but answered, “Victoria appeared in one of my music videos before she made her debut. However, I had to go to the army as soon as the album was released. That’s why I saw the music video in the army.”

He continued, “When I saw her in the music video in the army, I thought, ‘She’s like an angel.’ I wanted to ask her out after I finish my military service. However, when I got out of the military there were already quite a few male celebrities who were trying to pursue her. That’s why I gave up.”

Kangta concluded with the confession, “She’s my ideal type.”

Meanwhile, this episode shows Kangta performing his composed hit “Hope” with Super Junior-M’s Zhou Mi to the thundering applause from the audience.