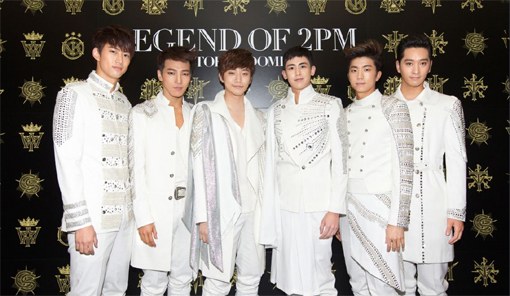 2PM’s Taecyeon: “Tokyo Dome Concert Is a New Beginning for Us”

2PM’sTaecyeon described their Tokyo Dome concert as a “new start.”

From April 20-21, 2PM held their “Legend of 2PM” concert that housed an audience of 11,000. During the press conference for the concert, Taecyeon stated, “It has been 5 years since 2PM debuted. There is a saying that an idol star’s limit is 5 years. However, we think that Tokyo Dome will be another beginning for us.”

He continued, “This Tokyo Dome Concert covers our 5 years of being 2PM. The concert provides the time to look back at the five years of music and performances in one stage. We started as an idol but have the desire to want to grow as artists and musicians. The Tokyo Dome concert is a starting point that will show us how we need to go forward.”

Taecyeon then added, “We debuted with the goal of making the name 2PM known in South Korea. After a few years, our goal was to make individual member’s names known. Our goal was not, ‘Let us go somewhere bigger than this.’ Our goal was to give the chance for each member of 2PM to stand on the stage on his own. Also, our goal was that when 2PM gets together on stage, we would create great synergy.”

2PM will release their new album in May, 2013. Their comeback is imminent!

2PM
Taecyeon
KPLG
How does this article make you feel?