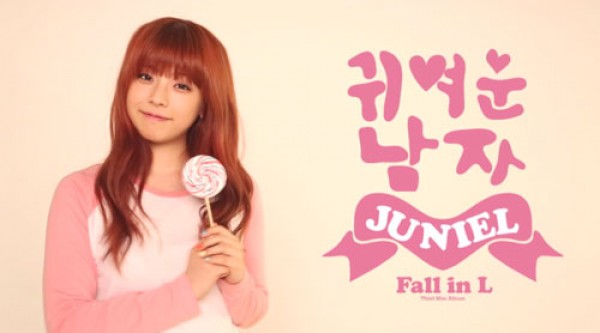 On April 22 at 3pm, Juniel wrote on her twitter, “Today, Juniel is coming to Korea University‘s Science Library in Junicar at 6pm, looking for a “Pretty Boy .” See you guys later.”

Approximately three hours later, Juniel did show up on Korea University’s campus in Junicar. There were about 3000 fans waiting for her since an hour before her arrival. Moreover, many Korea University students who were studying at the libraries also ran outside to see Juniel, leaving all major libraries on campus almost empty.

The crowd followed every move Juniel made, holding their smartphones above their heads to record the event. The continuing flash lights from hundreds of smartphones above the crowd created an un-traditional and yet, beautiful stage for Juniel. These fans also chanted “Pretty Boy,” the title song of Juniel’s upcoming album “Fall in L,” and Juniel gratefully responded to the welcoming fans by giving out Sunny 10 Sparklingades, a line of beverages that she’s endorsing.

This surprise event only lasted 20 minutes for the safety of everyone involved, due to unexpectedly large number of people gathered at the event.

Juniel’s upcoming title song “Pretty Boy” will be revealed on April 25. She will host “Pretty Boy Party” on the same day and officially begin the promotion cycle of her third mini album, “Fall in L.”

Juniel
Fall in L
Korea University
How does this article make you feel?