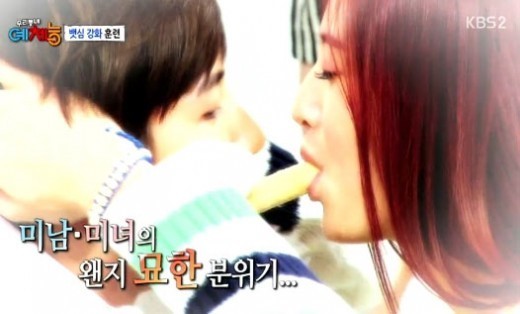 On the recent episode of KBS’s “Our Neighborhood’s Fine Arts and Physical Education,” which was aired on April 23, special training took place to increase players’ core strengths. The exercise included a set of sit-ups and sharing a stick cookie with the designated partner.

As DBSK’s Changmin and Rainbow’s Jaekyung played the game, it first appeared to resemble a scene from a love variety show. However, the reality was different. Startled by the approaching Changmin’s lips, Jaekyung dropped the cookie. Same thing happened several times, forcing Changmin to eat several large and dry cookies all by himself.

Afterward, Changmin could not even talk from all the cookies in his mouth and suffered from thirst making everyone laugh.

To this situation, MC Kang Ho Dong commented, “We hoped these two idols would develop romance from this game, but I think they now feel awkward with each other.”

Changmin
Jaekyung
Rainbow
DBSK
KPLG
Our Neighborhood Arts and Physical Education
How does this article make you feel?