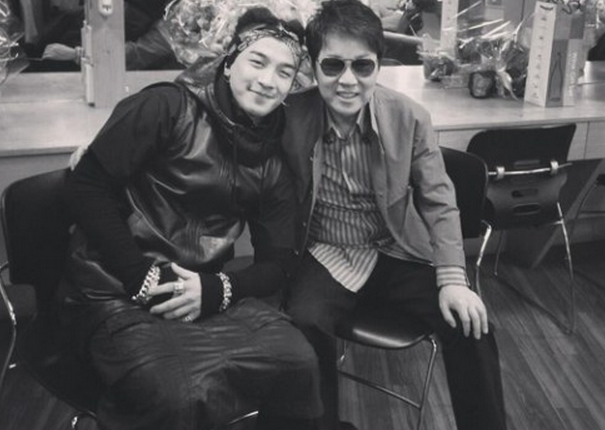 On April 23, Taeyang tweeted a photo of them together with the brief yet endearing and respectful caption, “With King.” And if you are somewhat familiar with K-Pop history, it’s no small wonder why Taeyang would pay his respects to the man who has produced many hit numbers back in the 80’s.

In the photo, Taeyang and Cho Yong Pil are seated together in what appears to be a dressing room. Taeyang leans in toward the senior artist in a chummy fashion as well, making this photo quite the precious keepsake for the younger singer.

The photo was reported to have been taken at the Seoul Olympic Stadium where Taeyang attended Cho Yong Pil’s showcase “Hello.”

Netizens who saw the photo commented, “I didn’t know Taeyang was a fan of Cho Yong Pil!”, “Taeyang and Cho Yong Pil seem like they are on friendly terms” and “I really enjoyed Cho Yong Pil’s showcase!”

Cho Yong Pil
Taeyang
KPLG
How does this article make you feel?