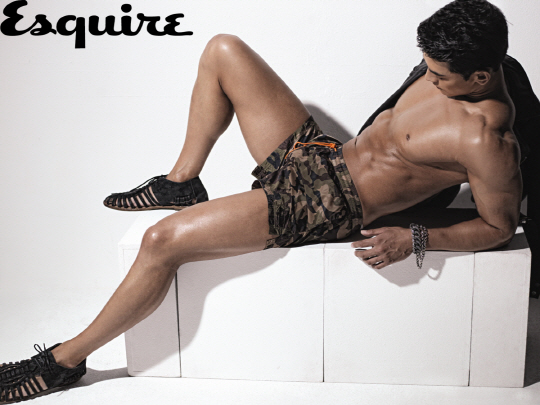 Jung Suk Won displayed his perfect body for the May issue of Esquire magazine. The actor’s agency, Forestar Entertainment, commented, “The photos from this shoot are almost 100% non-photoshopped. Jung Suk Won went through intense work-outs and strict diets to achieve that body. As he is starting to film for the movie, ‘Battle of Yeonpyeong,’ in which he will play a soldier with a lot of skin-baring scenes, Jung Suk Won will maintain his current body figure throughout the project.”

Jung Suk Won’s personal trainer also commented, “After ending his ‘Rules of the Jungle‘ filming, he had many advertisements and pictorials in line so he tried even harder to make his body. He went through six intense weeks of cardio exercises and weight training and avoided foods with high sodium.”

Jung Suk Won is also a groom-to-be as he recently announced his marriage plans with his long-time girlfriend, Baek Ji Young. They are planning on having a September wedding. Many netizens are saying, “No wonder Baek Ji Young fell for him” upon looking at these photos.

Esquire
Jung Suk Won
KPLG
How does this article make you feel?