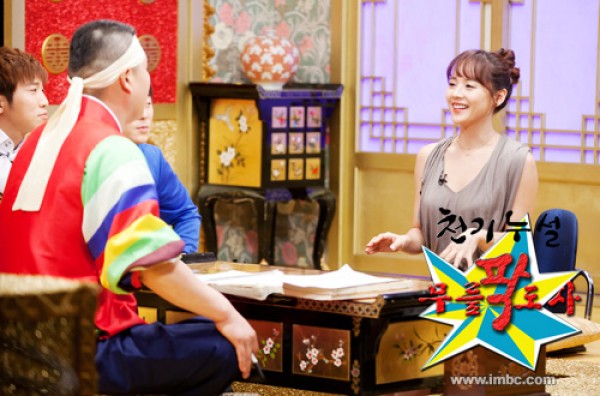 Eugene appeared on the most recent episode of MBC’s “Knee Drop Guru” and talked about her natural beauty.

She explained, “My beauty started to shine in 7th grade. I’ve had poor eyesight since first grade, so I wore glasses the whole time. Even when I look back at all these photos with me wearing glasses, I don’t think I’m cute or pretty. The big glasses were covering my eyes. But when I reached 7th grade, I started wearing contacts instead of glasses. That’s when I started getting attention from boys.”

She then revealed pictures of herself with and without thick, big-rimmed glasses from childhood. She also revealed several other old pictures, including a photo of herself from when she first immigrated to Guam. In all of these childhood pictures, Eugene looked as beautiful as she does now, proving that her beauty is all natural.

Also on this episode, Eugene opened up about her first love, who turned out to be a member of hip hop group Zikiri along with now famous Haha. She also explained rumors about her husband and his family background.

Eugene
HaHa
Knee Drop Guru
Zikiri
How does this article make you feel?