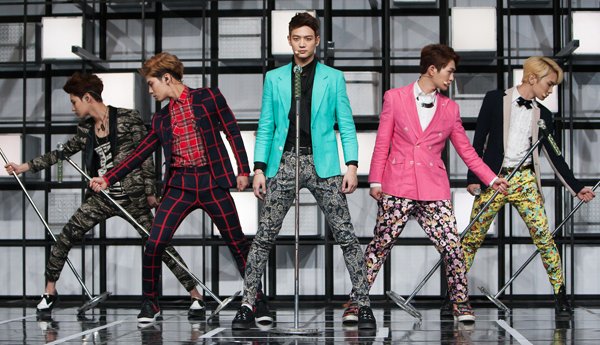 SHINee Vol. 3-2 – Why So Serious? The Misconceptions of Me (released)

SHINee, who has had much success with part one of their third album earlier this year, releases part two titled, “Why So Serious? The Misconceptions of Me.” The title track is “Why So Serious,” a pop dance number with electronic and funk rock sounds. The song holds lyrics about a zombie who falls in love with a girl. There are a total of nine tracks of various genres in this album.

4minute returns after a year with their fourth mini-album, “Name is 4Minute.” The girls show off their strengths through hip-hop, rock, and electronic genres. The title track is “What’s Your Name,” a Brave Brothers production. It is a hip-hop number that is expected to capture listeners’ ears right away. Other songs included in the album are rock intro, “What’s My Name” and unique number, “Whatever.”

Secret makes a 180 degree transformation this spring! The girls come back sweeter than ever with their fourth mini-album, “Letter From Secret.” The title track is “Yoohoo,” an exciting synth pop dance track with cute lyrics about falling in love. Listeners will be able to hear the girls’ aegyo in this track.

Juniel makes a comeback this spring with her third mini-album, “Fall in L.” The singer songwriter makes a 180 degree transformation just in time for spring. Fans will be able to see her lovable and lively side through her title track, “Cute Boy.” It is a bright, upbeat pop number with fun lyrics.

Teen Top, who has received much love over the years, releases a special repackaged version of their first album, “No. 1.” This three disc album consists of twelve original tracks, two new songs, as well as a dvd of their showcase. The two new songs are “Walk By” and “Jealousy.” The former track is a song about breakup and sadness while the latter track is a trendy number that meshes both vocals and rap very well.

Lyn releases her first single of her eighth album, “Glass Heart.” The title track is of the same name and is a sad number with a piano melody. Lyn took part in penning the lyrics to the song herself. Also included in the album is previously released R&B track, “Tonight.”

Hip-hop duo, Geeks releases their first studio album, “Backpack” this year. Consisting of members Lil Boi and Louie, the duo has garnered much fame in the past with their mini-album. There are a total of fifteen tracks in this album including previously released track, “How Is It.” This album follows the theme of love and life that listeners can relate to.

Roy Kim releases a digital single, “Spring Spring Spring” just in time for the season. Composed and penned by the singer himself, this is his second work. It is of the country genre where the singer’s soft vocals can be heard. The acoustic guitar and whistling that can be heard throughout the song definitely fits the spring mood.