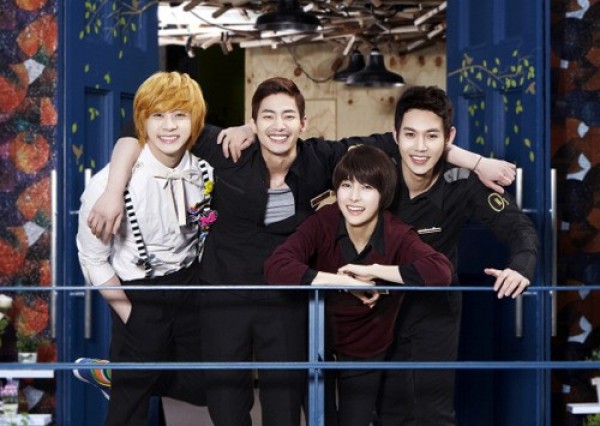 On April 23, staff of MBC QueeN’s “Nail Shop Paris” threw a surprise event for its actors. During filming, power on the set went out. While the actors were bewildered and trying to figure out what was going on, some staff members came into the room carrying a cake with candles lit on top of it, thanking everyone for all their hard work.

All the actors were caught off guard, not being able to speak. Park Gyuri was especially touched by this surprise event. When she spotted the cake, she plunked down and cried her eyes out. Since this is her first time playing a leading role, Park Gyuri has been especially attached to the drama, as well as her character. As the filming process reached its end, she talked to her close friends and colleagues about how empty and lost she felt without “Nail Shop Paris” to look forward to. When Park Gyuri broke down and started crying, her co-stars Jun Ji Hoo, Song Jae Rim, and MBLAQ‘s Thunder comforted her.

After officially wrapping up the filming of “Nail Shop Paris,” Park Gyuri thanked everyone via Twitter. She wrote, “This is not something that everyone gets to experience. I’m so fortunate. I’d like to personally thank every single person involved in the production. Stay healthy.”

“Nail Shop Paris” will start airing on May 3 on MBC QueeN and MBC Dramanet. Park Gyuri Plays the role of Hong Yeo Joo, a girl who dresses up as a boy to work at the nail shop “Paris.”