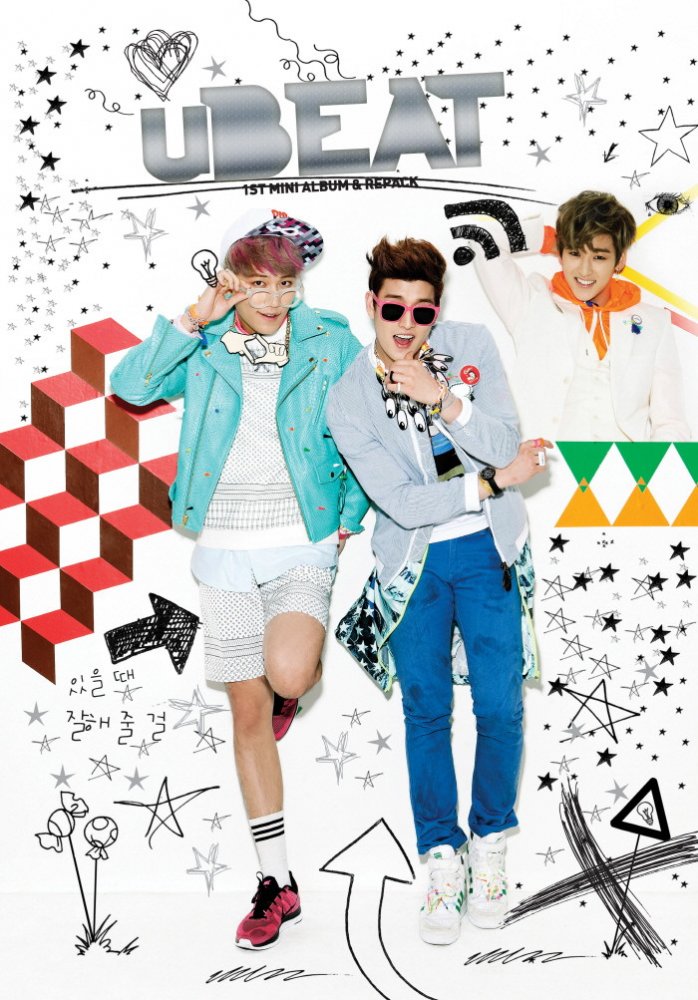 U-KISS’ uBEAT recently joined the list of subunits to debut this year. This week, The One Shots‘ editor Michelle examines uBEAT’s album art and explains why she thinks it is the perfect metaphor for the troubles U-KISS continues to encounter in their career.

I’m no art expert. In fact, the extent of my knowledge of art starts and ends in one measly year of high school. But I don’t think I even need those kinds of credentials to say that uBEAT’s album art is a perfect example of the mess their company has made of U-KISS’ career.

It hasn’t even been half a year, and it’s clear that one trend that has taken the K-Pop world by storm is subunits. Of course, a group like U-KISS, who continues to struggle to make a name for themselves in the industry, is not one to pass up following a trend that could potentially get them any sort of buzz.

When news first broke that U-KISS would be debuting a subunit, it was assumed that they’d be officially a trio, AJ, Eli and Kevin. KissMes looked forward to the likeliness of a hip-hop sound, with the subunit’s inclusion of two rappers and a main vocalist, while international fans kept their fingers crossed for more English tracks from the three English speakers of the group. Individual teaser photos for all three members were released, and hopes were high that uBEAT just might be what U-KISS needs to make a strong impact this year, especially after their mediocre comeback with “Standing Still.”

D-Day arrives, and the mini-album hits the interwebs along with the accompanying news articles. But wait. It looks like there’s been some sort of misunderstanding. NH Media informs the world that uBEAT is actually just Eli and AJ, with a feature from Kevin. And that means what exactly?

Well, according to their album jacket cover, it means Kevin will be the creeping bystander, backing up for a rapping duo. In fact, he appears so insignificant that the poor boy was clearly photoshopped in. Do a Google images search for uBEAT, and you will see the original image with just AJ and Eli. And it’s not even a good Photoshop job. I could have made it with my amateur skills. Kevin has just been shoved to the side, as if he were an afterthought, and his featuring role in the group apparently doesn’t even warrant a full body picture.

Unfortunately, this is anything but accurate. We know it wasn’t a last minute decision to add him into the subunit, given that individual teaser photos had been released and, oh yeah, his voice is on the majority of the title track. Plus, they clearly have plenty of other photos to choose from with the three of them shown equally, so it continues to baffle me why they chose the one that they did. Instead, it seems like NH Media just couldn’t decide whether to make him an official uBEAT member or not, so they just added him in there for good measure and to keep things ambiguous. Add on the kindergartener scribbles that they try to pass off as art, and NH Media sends their message loud and clear: We have no idea what we are doing.

The easiest way for me to wrap my head around this situation is to compare it to Infinite’s hip-hop subunit Infinite-H from earlier this year, made up of the group’s very own duo of rappers, Dongwoo and Hoya. Their song, “Special Girl,” also had a featuring from a vocalist named Bumkey, so naturally, I imagined uBEAT to go for a similar concept, especially since Infinite-H was fairly successful. Unfortunately, all similarities and possible points of praise stop here, at the idea of two rappers and a featured vocalist.

Whereas a collaboration with renowned hip-hop producer Primary gave the Infinite-H subunit a distinct sound that highlighted the rap capabilities of Dongwoo and Hoya in actual verses and used Bumkey’s voice simply for a melodic chorus, NH Media almost did the exact opposite with uBEAT. Take a listen to their title song, “Should Have Treated You Better,” and you’ll find that Kevin sings about two-thirds of the song, being responsible for both the verses and the chorus, while Eli and AJ barely get a minute each. And yes, I am a nerd and pulled out my stopwatch for that.

Watch their first live performance of the song, and half of the time, it looks more like AJ and Eli are two of the main back-up dancers for a solo artist. Eli’s adlibs could easily have been played as a back-up track, especially since the cameraman rarely showed him singing those lines. And although AJ and Eli have proven that they can carry a tune, one could not help but wonder what would happen if their “featured” vocalist could not show up one day. After all, one implication behind the word “featuring” is that he is not obligated to perform, as he is not a permanent or official member of the group. Bumkey was not present in all Infinite-H performances, but Dongwoo and Hoya were easily able to cover a simple chorus. I’m not entirely confident that AJ and Eli would be able to fill in the enormous gaps that Kevin’s absence would surely make.

Then, check out the rest of the album, and after you get pissed that it’s mainly a repackage of the group’s Collage album and devoid of any English tracks, you’ll discover that Kevin wasn’t just featured on that one title track but on all of their tracks, with the exception of “Party All the Time,” which we already knew to be an AJ and Eli duet from the Collage album. The music video does not help much either in convincing us that this is supposed to be uBEAT featuring Kevin and not Kevin featuring uBEAT, nor does it help us in defining what the uniquely uBEAT sound or concept is. This might as well have been another failed U-KISS promotion because frankly, the U-KISS songs sound just about the same, with Soohyun and Kevin singing the bulk of the song and AJ and Eli adding some raps here and there.

Most of us probably never pay much attention to a group’s album art, but this one just goes to show how confused NH Media remains when it comes to promoting their group appropriately. If I wasn’t a fan of the boys already and had just been perusing the K-Pop selections at my local K-Pop store, I definitely would have been less likely to pick up an album that looks like an amateur graphic artist threw together in a matter of an hour or so. If you’re not going to take the time and effort to polish up your group’s concept and album jacket, which is a buyer’s first impression of the album, why should I trust that the music itself isn’t as rushed?