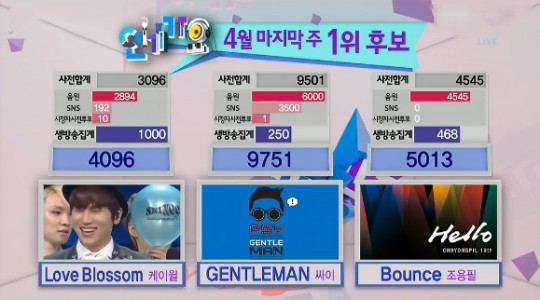 On the April 28 broadcast of “Inkigayo,” PSY‘s “Gentleman” took the win after battling it out with K.Will‘s “Love Blossom” and Cho Yong Pil’s “Bounce.” The zero score for SNS vote for “Bounce” attracted viewers’ attention, leading to questions about how the votes are counted. Cho Yong Pil’s “Bounce” was released on music portals on April 16 and it has been topping charts, even beating PSY‘s “Gentleman” on some sites. The song has been both critically and popularly acclaimed.

The aggregate voting results reflected on the Sunday broadcast are culled from the votes made on midnight of Tuesday until the midnight of Monday of the week before. Thus, the results of April 28 were gathered from April 16 until April 22.

Also, the April 28 SNS votes did not yet measure the mentions of the Cho Yong Pil on Twitter, Facebook, and me2day, with YouTube still getting the majority of the SNS measures. The director likewise explained that even if Cho Yong Pil or “Bounce” were hot topics at that time, it did not garner SNS points because it was not released within the voting time for the April 28 results.

“The ‘Bounce’ music video came out on April 23, so the YouTube views for it did not count towards the aggregate,” the PD explained.

In the coming edition of “Inkigayo” on the first week of May, SNS scores for Cho Yong Pil’s “Bounce” is expected to pick up.