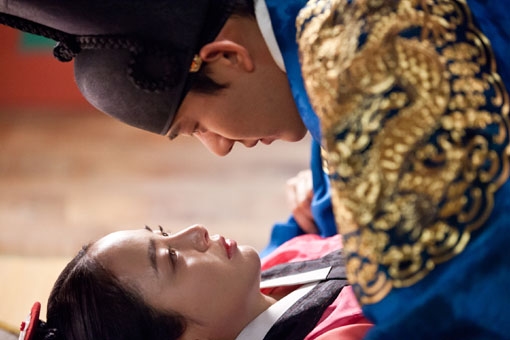 Yoo Ah In Gets on Top of Kim Tae Hee!

Wow good for Yoo Ah In! It looks as though through the drama “Jang Ok Jung, Lives in Love,” he was able to fulfill the dreams that most Koreans have. Which is, literally getting on top of Kim Tae Hee! On the April 29 episode of “Jang Ok Jung,” the love line between Kim Tae Hee’s character “Ok Jung” and Yoo Ah In’s character “Lee Soon” was finally beginning to be established.

The picture of Yoo Ah In on top of Kim Tae Hee was released before the airing of the episode for promotional purposes. How well did that plan succeed?

Well, the 7th episode (Aired on April 29) reached an 8.2% viewership rating according to AGB Nielsen Media Research. That number is 0.7% higher than the previous episode. The viewership rating for the show has been steadily increasing after the 5th episode. It looks as though this is parallel to the developing relationship between Yooh Ah In and Kim Tae Hee’s respective characters!