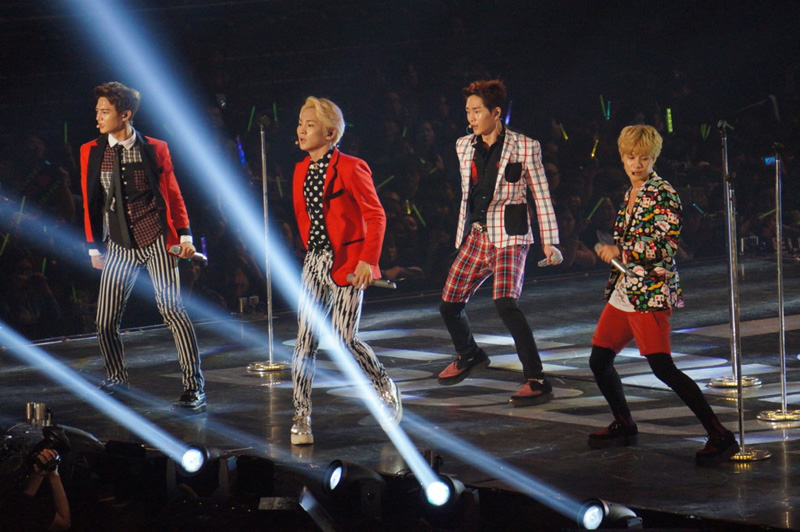 Soompiers Rachel and Shirley are Americans living Taiwan. Lucky for us, they are also great writers and photographers. I hope you enjoy their recap of this special event as much as I did, and look forward to their future coverage of the active K-Pop scene in Taiwan! -soomp

The Mnet music show M! Countdown traveled to Taiwan for the first time on April 24, 2013 to the excitement of many local fans. SHINee, INFINITE, T-ara, and SISTAR headlined the Nihao-Taiwan concert. They were joined by more than 10 other popular performers including such artists as K.Will, Davichi, and Teen Top.

Since K-Pop is such a large part of Taiwanese pop culture, it is rather surprising that a show like M! Countdown had not yet come to Taiwan. Taiwan is indisputably a staple on the K-Pop world tour circuit. Big name artists like Big Bang, CNBlue, FT Island, and BEAST have all made an appearance just within the last year. As Americans currently living in Taiwan, we have been fortunate enough to live out many of our K-Pop dreams and attend more concerts and fan-meetings than we ever imagined.

This concert not only met our expectations but expanded our K-Pop horizons as well. We were thrilled to be able to see many artists that rarely have the opportunity to perform outside of Korea. The top-notch lighting displays and use of multiple stages provided for great audience interaction and enjoyment. The three-hour concert was over before we knew it!

Beforehand, Mnet hosted a few pre-concert activities including an interview with Dal Shabet and the chance to take pictures with the M! Countdown trophy and mascot. They also gave away various prizes like bandanas, notebooks, and even a few front row tickets.

At 8:05 p.m. M!Countdown Nihao Taiwan officially began. H.O.T.’s Tony An and SHINee’s Onew were the MCs of the night, doing their best to speak some Chinese and interact with the audience.

Teen Top opened the show with an impressive entrance from the top of the main stage, starting with “Crazy” and ending with their current hit “Miss Right.” Their white and black suits could be a signal that they are ready for a more mature, but still upbeat, sound. We were especially looking forward to “Miss Right” because of the unique dance and catchy tune. They did not disappoint. Teen Top was a great choice for the opening act as there were many loyal and vocal fans in the audience.

Girl’s Day immediately grabbed our attention with their skin-tight red outfits and sparkly silver suspenders. Their image has certainly evolved from the innocent sound of their debut. While their first performance was the cutesy “Twinkle Twinkle,” the highlight was definitely their hot rendition of “Expectation.” From an entertainment perspective, the suspender dance clearly wowed the crowd.

The next act, Hong Dae Kwang, gave the first nod to Taiwanese Pop culture by singing the famous theme song from “Meteor Garden,” the Taiwanese adaptation of “Boys Over Flowers.” Clips from the drama played in the background as Hong Dae Kwang and the audience sang the Chinese song together, a neat instance of cross-cultural interaction! His second ballad “Far Away” was an impressive vocal performance and the slower pace provided a nice break between energetic acts.

Tasty and Dal Shabet continued with a series of short covers of Taiwanese songs by artists Lollipop and S.H.E. Once again the audience response was fantastic.

Dal Shabet then performed “To Be Or Not To Be” and “Mr.BangBang.” While colorful and pop-y, their performance didn’t really stand out compared to the other acts.

The sound immediately turned from cute to upbeat as Tasty took the stage. In addition to their impressive stage presence and awesome dance skills, their fluency in Chinese made for great audience interaction. They performed their songs “Spectrum” and “You Know Me.” While we weren’t well versed in their music, we definitely enjoyed their performance. By the end, they earned two new Tasty fans from America!

Next: New U-KISS subunit uBeat, Baechigi and Ailee, and Davichi

Next up was the highly anticipated debut of the U-KISS sub-unit uBeat. The trio exuded a colorful and springy image. While the audience loudly cheered on uBeat, we thought the song, “Could Have Treated You Better,” was upbeat although relatively generic sounding.

U-KISS then joined uBeat members on stage for two songs including their current hit “Standing Still.” They impressed their fans, especially the ones sitting behind us, judging from their loud screams.

Former M! Countdown winners Baechigi and Ailee came on stage next to perform their collaborative hit “Shower of Tears.” This was probably the song we were most looking forward to and the performance even exceeded our expectations. Ailee’s powerful voice seamlessly supplemented Baechigi’s hip-hop sound. Their song evokes a decidedly nostalgic 20’s feel, transfixing the audience from beginning to end. Baechigi, then, went on to hold a solo stage with another great song. They successfully engaged the crowd as everyone sang along to the distinctive chorus.

Davichi performed their recent hits “Turtle“and “Be Warmed.” They have undeniably powerful vocals but we felt at times they were somewhat pitchy. Even though they sang slower songs, the audience still loved every bit of the performance. And to confirm what no one really needs confirmation for, Kang Mi-Kyung is truly gorgeous in real life.

Signaling a change of pace, SISTAR19 emerged in their short, tight leopard print rompers. They certainly didn’t hold back on sexy, and yes, the infamous bench dance from “Gone Not Around Any Longer” was just as hot as it was in their music video.

SISTAR was the first of the headlining acts to appear. The remaining members joined the sub-unit on the extended stage to perform “Alone” and “Loving You.” Needless to say their performance left male fans screaming for more.

Soon after Ailee introduced him in perfect English, ballad superstar K.Will took the stage. His performance of “Love Blossom” gave off a great spring feel. With his wonderful vocal power and oozing charisma, it’s no surprise that he is so popular in Korea.

K.Will repaid the favor by introducing Ailee. She blew us away with the most powerful vocal performance of the night. She flawlessly belted out her hit “Show U,” leaving the audience stunned and wanting more. Unfortunately, she only performed the one song.

Next: T-ara, INFINITE, and SHINee

Now for the remaining headliners: T-ara, INFINITE, and SHINee.

Introduced by a montage of the “Bo Peep Bo Peep” craze in Taiwan, T-ara and Taiwanese idol girl group Dream Girls emerged for their collaborative stage. Dream Girls performed a portion of the song in Chinese before the curtain lifted to reveal T-ara equipped with the trademark Bo Peep paws. This song and dance took Taiwan by storm when it first came out and it appears that none of the fervor has died down.

After Dream Girls exited, T-ara made their way to the extended stage to perform “Sexy Love” and finish with their hit “Lovey Dovey.” We personally loved every minute of their charming performance. Seeing the “Sexy Love” robot dance was especially thrilling.

INFINITE entered the stage with great flare. Appearing first, Hoya showcased his great dance skills at the top of the main stage. Soon after, the members converged on the extended stage and performed “Be Mine.” They went back to the main stage for “Nothing’s Over” and ended with an explosive rendition of “Man in Love.” Seeing our favorite members, L, Hoya, and Dongwoo, was certainly a highlight of the evening!

One minor sore spot for us was the absence of INFINITE H’s “Special Girl.” It’s a song that is near and dear to our hearts and we were sad that it wasn’t performed.

The official final act for the evening was the ever-popular SHINee. Despite the fact that Jonghyun wasn’t there, the four other members still put on a wonderful show. They came out in striking red and black outfits, firing the audience up with their classic hit “Lucifer.” “Sherlock“was up next and a backup dancer filled for Jonghyun while the other members took turns singing his parts. The lighting backdrop was particularly stunning with images of shattering glass. We felt that this matched the tone of “Sherlock” perfectly.

“Dream Girl” was a fantastic song to end the night. The audience loved the entire performance. The dance with the microphone stands was especially riveting.

Shortly after SHINee’s performance finished, Tony An and Onew came out to announce the winner of M! Countdown. Surprise, surprise. PSY took home the trophy. Right on cue, backup dancers lined the stage to perform the “Gentleman” dance as clips of the music video played in the background. While the dance was cute and expected, we would have also liked to see a winner out of tonight’s lineup.

Encore time! Teen Top covered a hit by classic K-Pop group Clon. DJ Koo himself made an impressive but very brief cameo during the chorus. While we weren’t familiar with him, the Taiwanese audience loved him due to his vast popularity during the 90s.

For the finale, DJ Koo along with all the backup dancers appeared on stage, blasting a remix of SHINee’s “Beautiful.” SHINee members came out first and the rest of tonight’s acts shortly followed.

Amidst the party-like atmosphere, complete with streamers, confetti, and crazy lights, the artists threw autographed balls into the standing sections.

To finish the night, everyone lined up on the main stage and took a final bow. It was a great ending to an awesome concert!

You can watch the entire Nihao Taiwan show here!