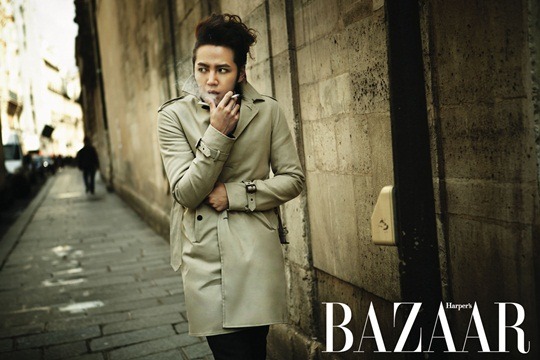 Jang Geun Suk and Verbal Jint are known to be close so the actor decided to support Verbal Jint’s DJ debut.

Jang Geun Suk talked about his next project during the show. He started off by saying, “For a whole year, I didn’t get any offers from anyone,” and “I think I got hurt a lot from my last project. It burned me.”

Jang Geun Suk’s last project was the KBS drama, “Love Rain,” which aired last year. He acted alongside Girls’ Generation‘s YoonA and Seo In Gook. Although Jang Geun Suk and YoonA’s match-up became a hot topic, the drama unfortunately did not see good viewership ratings throughout its course.

When Verbal Jint comforted him by saying, “I watched that drama real-time,” Jang Geun Suk playfully answered, “Why did you do that? My heart aches.”

Finally, Jang Geun Suk revealed, “After thinking hard about a few projects, I finally made a decision. But importantly, I did not sign the contract just yet. So I still can’t tell you what project it is.”

Stay tuned on Soompi to find out Jang Geun Suk’s next project!

Jang Keun Suk
Verbal Jint
KPLG
How does this article make you feel?