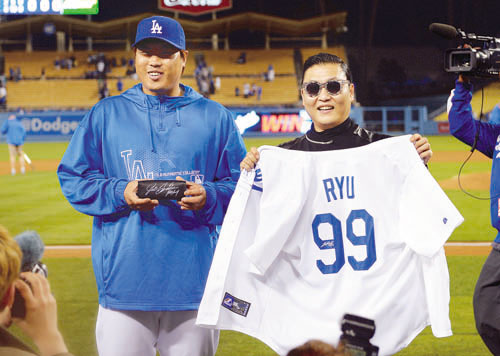 PSY has been recently spotted at the Dodgers Stadium in Los Angeles, California once again!

Two of the biggest Korean stars in America at the moment, PSY and Ryu Hyun Jin of the Los Angeles Dodgers, have finally come together!

On April 30, the LA Dodgers played against the Colorado Rockies at the Dodgers Stadium in California. At the top of the 4th inning, PSY’s “Gentleman” music video was played on the jumbotron. Then, the crowd was able to see PSY near the third base area, which made the whole stadium roar with delight.

PSY cheerfully greeted the audience by waving his hands and busting out some of his dance moves. Since the people didn’t know the “Gentleman” dance just yet, PSY proceeded to dance his famous “horse-riding dance” but added bits of the “arrogant dance” in-between.

PSY proceeded to throw two signed baseballs into the crowd and then moved up to the VIP seats.

To further the delight of fans, Ryu Hyun Jin had a very good game from the mound and the Dodgers went on for a big win. The two stars later on shared a hug to commemorate the victory.

Ryu Hyun Jin commented, “Thank you for coming to support me,” and PSY praised the athlete by saying, “You did so well in this game.”

PSY continued to say, “I will never forget this moment,” as he took Ryu’s jersey.

PSY was spotted at the Dodgers Stadium last year on August. Right after a video of PSY at Dodgers Stadium was uploaded onto YouTube, his “Gangnam Style” music video entered its first stages of becoming viral.

PSY
KPLG
Ryu Hyun Jin
How does this article make you feel?