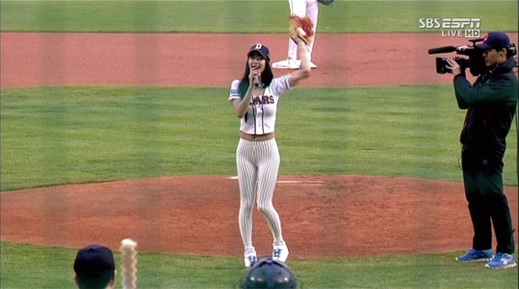 Clara Causes a Stir with Her Sexy Ceremonial First Pitch

Previously we reported the fact that Clara was causing controversy for wearing revealing clothing on MBC Every1’s “Singles 2.” Clara has appeared in Jay Park’s “Joah” music video and also had minor roles in different dramas.

Clara caused quite a stir when she did the ceremonial first pitch for the baseball game between the Doosan Bears and LG Twins on May 3. She wore a short Bears uniform that revealed her abs and tight striped pants. Clara’s clothing revealed her beautiful body. She also positioned her body when throwing the first pitch to make her look even sexier. Her pitch was called a “sexy pitch.” The Korean media also noted that when Clara introduced herself she said, “Hello I am the actress Clara.” Clara also posted pictures of her practicing throwing a baseball at Dosan Park on May 4.