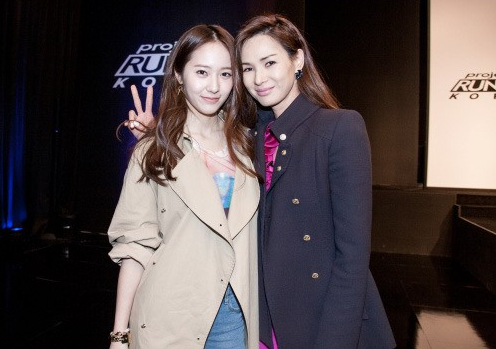 f(x)’s Krystal Transforms into a Bird

f(x)‘s Krystal recently met up with model Lee Sora on the set of “Project Runway Korea.”

On May 5, Krystal made an appearance on the 9th episode of “Project Runway Korea” as a special client.

Krystal asked the five designers to create a dress made out of feathers for her to wear in a photoshoot spread. The challenging part of this task was to design it solely out of feathers. Krystal also appeared as a guest judge on the show as the designers sent their pieces down the runway.

Winners from this episode’s round advanced to the top 3 semi-final round. The designers also had an increased budget to buy their materials since feathers can be very costly.

The rules of the show are the same as the “Project Runway” series hosted by Heidi Klum and mentor Tim Gunn in the U.S. Designers who are able to stay true to their style and present avant-garde pieces are allowed to advance to the next round until one winner is chosen.

And as promised, Krystal modeled the winning dress!