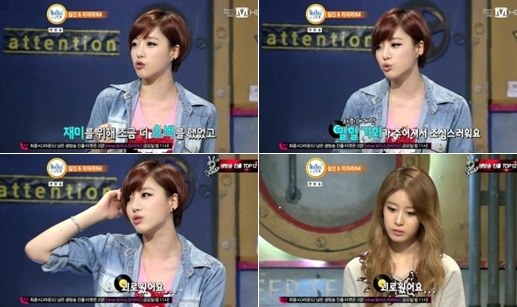 T-ara N4 Speaks Up About the “Hwayoung Incident” with Tears

The members of T-ara N4 recently spoke up about the “Hwayoung Incident” and showed tears as they expressed their misery over not being able to talk about it for a long time.

Eunjung, Hyomin, Jiyeon and Areum of T-ara’s newest sub-unit, T-ara N4 appeared on a recent episode of “Beatles Code 2” and spoke up about ex-T-ara member, Hwayoung.

They opened up about the Twitter incident and said, “We think it was an immature and foolish act. To be honest, we were fighting for about two days at that time. We were going to just work it out amongst ourselves but it was our fault for making things public.”

Eunjung continued, “The rumors were not true but even we got to doubt ourselves and ask if we did do all those things after seeing all those ‘evidence’ clips and images that were being circulated online. But those clips were all edited in a certain way to show bad things and so we really felt like bad people and it was miserable for us.” The other members nodded their heads in agreement with Eunjung.

During this “Beatles Code 2” episode, they showed a clip of a certain Japanese TV source, saying that it was painful to see how the clip of Eunjung feeding Hwayoung some rice cake on Japanese TV became such a controversy. As the T-ara N4 members watched the clip, they said, “We exaggerated a bit to make things more fun but it came off the wrong way.”

Jiyeon also commented, “I think we all feel the same way. We want to go back to the beginning and work hard.”