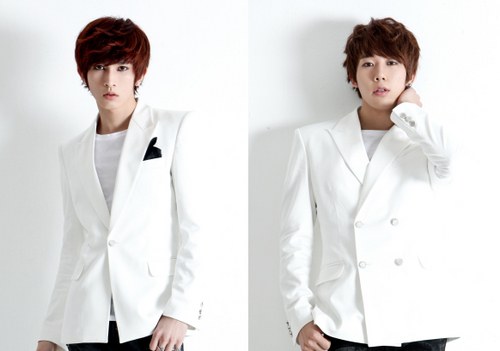 U-KISS’ Kiseop and Hoon Cast for the Musical “Goong”

U-KISS members Kiseop and Hoon have been cast as the two lead roles of the popular musical, “Goong.”

They will be performing in “Goong” for the first time in Osaka, Japan this coming July. Other idol singers such as DBSK‘s Yunho and SS501‘s Kim Kyu Jong have taken on roles for “Goong” the musical in the past.

Other cast members for this production of “Goong” includes Supernova‘s Sungmo and FTISLAND‘s Choi Min Hwan.

Hoon commented, “This is my second time performing in a musical. I will try my best to satisfy the audience who have come to see us.”

Kiseup, who is performing in a musical for his first time, commented, “Since it’s my first musical, I’m very nervous. I have a lot of lines so there’s a lot to memorize and learn but I will try my best to show a good performance.”

U-KISS recently wrapped up their third album promotions and are focusing on their individual activities. U-KISS has also produced their first sub-unit uBeat with members Eli, AJ and Kevin to great success.

Goong Musical
Hoon
Kiseop
U-KISS
KPLG
How does this article make you feel?