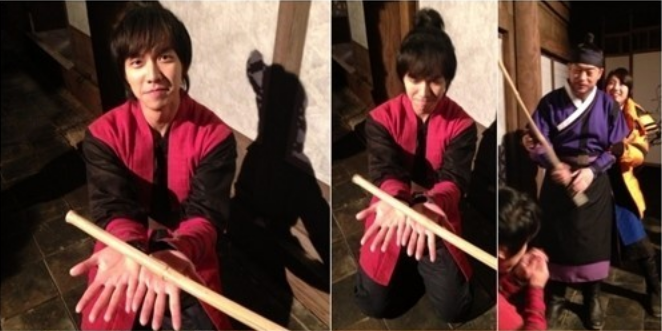 Lee Seung Gi Gets “Punished” for His Naughty Hand

In the pictures are Lee Seung Gi, Suzy and Jo Sung Ha. Lee Seung Gi appears to be begging for forgiveness while Jo Sung Ha is pretending to punish him. Suzy, on the other hand, looks like she is trying to stop Jo Sung Ha from such discipline.

According to the drama production staff, these photos were taken after the airing of the recent episode, which showed Lee Seung Gi accidentally putting his hand on Suzy’s chest. These pictures were taken to appease Suzy’s uncle fans for Lee Seung Gi’s “naughty hand.”

Fans that saw these pictures commented, “Lee Seung Gi is so adorable,” “He definitely deserves punishment,” “I will have to watch the episode.”