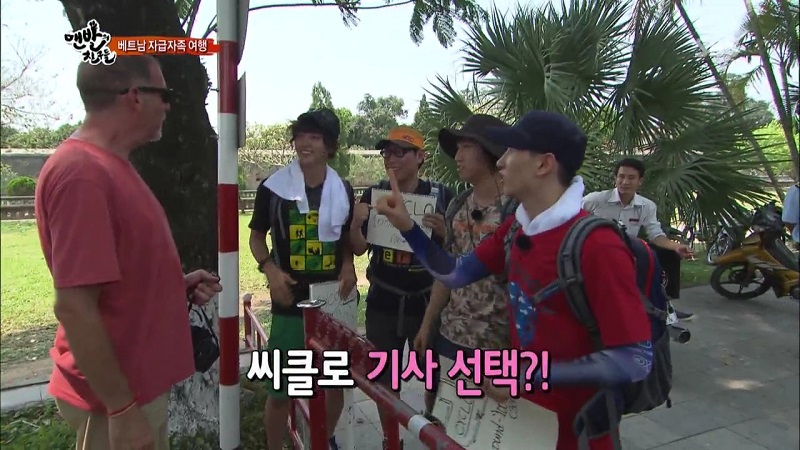 [Review] Rooting for the Barefoot Friends

A few weeks ago a good friend of mine recommended a variety show to watch and to write about. Knowing that we have similar taste, I took her advice and watched “Barefoot Friends” on Daebak Subs (R.I.P). Ten minutes in, I was howling with laughter and already planning a rave review.

“Barefoot Friends” is Kang Ho Dong‘s latest variety show where eight celebrities (half of them idols, of course) travel to foreign countries to experience “real happiness” with the locals. This would be Kang Ho Dong’s first weekend variety show since “X-Man” ended in 2007.

By the first episode, I was in love. There were so many good things about this show. Take these fancy celebrities and show them how real people live. The cast members had to support themselves by working like a native and earning that much too. I love any show with a good message and a lesson to learn.

It was the cast that won me over. We have the variety veterans, Kang Ho Dong, Yoon Jong Shin, Yoon Se Yoon, and Kim Bum Soo (who is more of a singer but he’s funny enough to be listed with them). Then we had the “visuals” starting with the variety favorite Eunhyuk, the veteran idol Kim Hyun Joong, the sweet and sexy UEE, and the variety newbie Yoon Shi Yoon. It was a good balance and when they split into teams they made sure to even things out.

Oh Yoon Shi Yoon. I appreciated him as an actor and I was excited to see how he would do for his first variety show; I wasn’t disappointed. It was as if he was still in character from “Flower Boy Next Door.” He was bubbly, eager, and full of wide-eyed wonderment. It was clear that he was putting his 100% effort into the show and I was cheering for him. Not only that, even without make up or sleep he looked great.

Almost as good was Kim Hyun Joong. I wasn’t a fan of his during his SS501 or “Boys Over Flower” days, but by the end of his show I was infatuated. Gone was the pretty flower boy: in front of me was a man! A man who shone even without make up or stylish hair. A man who was clearly cracked out from lack of sleep and food but made me feel all tingly inside. As I watched him struggle to wake up at the crack of dawn I thought, “Now this is a face I could wake up to every morning.”

Everyone else was great too. At the end of the first episode I felt happy yet hungry for more, as any good entertainment should leave you feeling. So I quickly watched the second episode.

This episode I didn’t love as much as the first. I felt like the members were too tired and too worn out to be really funny, but the last conversation with Kang Ho Dong and cracked out Kim Hyun Joong on their way to a desert redeemed the rest of the show. I laughed so hard at the ridiculousness that was coming out of their mouths.

Then I waited for the third episode and when it came out, I spent the entire hour hoping that it would get better. At the end, I felt sad. Somehow, somewhere, the great spirit of the show that I loved so much was lost. It dragged on and at a certain point I felt really bad for the members. They were trying so hard with what little they had to work with.

It is no wonder the ratings have been bad. It did not have a great start to begin with, with its first episode receiving a 5.6% (AGB) and the third episode plummeting down to a dismal 2.9%. That is horrible for a show that is on before the ever so popular “Running Man.” With ratings that low, the future is looking grim for this show. It could become Kang Ho Dong’s second cancelled show since his return.

There are numerous reasons and opinions on why this show has done so poorly so feel free to share your thoughts below. The good news is that the cast has already filmed in Indonesia, which means the show has a few more episodes left at the very least. My hope is that the producers and editors learn from the first three episode and improve upon it. The casting is gold: the organization not so much.

I’m going to keep watching the show until it ends, whether that means within a month or in a few years. It’s like having that perfect first date and even though the other dates have been disappointing, you hold on with the hope that the man you fell in love with will reemerge to sweep you off your feet once more.

Come on my barefoot friends, I’m rooting for you.