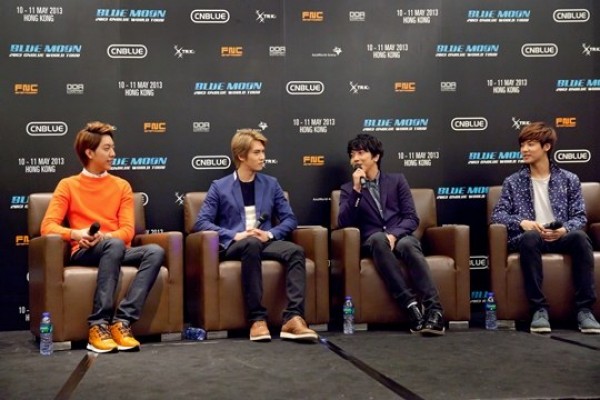 CNBlue: “We Want to Get Tattoos and Rebel, But Not Now”

On May 10, CNBlue held a press conference in Hong Kong’s Asia World Expo Arena prior to their concert “2013 Blue Moon World Tour.”

During the press conference CNBlue was asked, “A lot of rock bands have very rebellious appearances with tattoos and piercings, but CNBlue is very clean cut and dandy compare to these bands. Do you ever dream of rebelling? Also, how do you avoid the urge when you want to date?”

Kang Min Hyuk responded immediately, “We are all men, too. We love beautiful women.” His response caused everyone in the audience and fellow CNBlue members to burst out into laughter. He then added, “We just spend more time together with each other when we get that kind of urge. When I get some free time, I go out to eat and watch movies with Jung Shin. I try to erase the thought and desire to be in a relationship that way. Now that I think about it, my job is pretty saddening. I don’t think I’ve met the right person, yet.”

Jung Yong Hwa commented, “Of course I want to get tattoos and piercings, but I decided not to indulge such thoughts since my fans are so against the idea. Nonetheless, we try to be as carefree as possible when we are not in front of cameras. We watch other rock stars like Oasis cursing and expressing all of their feelings and opinions and live vicariously through their rebellious, free-spirited lives. Sometimes I wonder, ‘That is so cool. How would people react if we act like that?'”

Meanwhile, CNBlue hosted concerts in Hong Kong on May 10 and May 11 as a part of their “2013 Blue Moon World Tour.” They performed 23 songs including “I’m Sorry” from their most recent album “Re:BLUE” and other hit songs like “Alone” and “Intuition” in front of approximately 14,000 people in the audience.