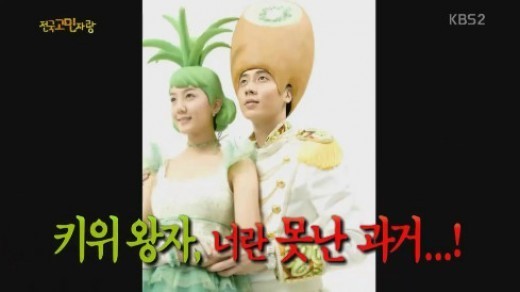 On the most recent episode of KBS “Talk Show Hello,” Shinhwa appeared as special panel members and listened to guests’ concerns. During this episode, Shinhwa was asked, “Do you have a moment in your 15-year Shinhwa career that you want to erase?”

Kim Dong Wan responded immediately, “This is not about me, but can I still say it?” He turned to Andy, asking “Is it okay Andy?” Although Andy gently asked Kim Dong Wan to not talk about whatever he was about to bring up, it didn’t deter Kim Dong Wan. With a big smile on his face, Kim Dong Wan brought up Andy’s “Kiwi Prince” days, adding, “He’s such a cute and lovely Kiwi Prince. We all think it’s so cute, but he hates it.”

Andy explained, “At first, it was just another commercial shooting. The director told me, ‘Since you’re the prince in this commercial, do your hair like a prince.’ So I did. Then suddenly he said, ‘Since you’re the Kiwi Prince, wear this kiwi hat.’ Me in that giant kiwi hat is something that I would like to erase from history if I could.”