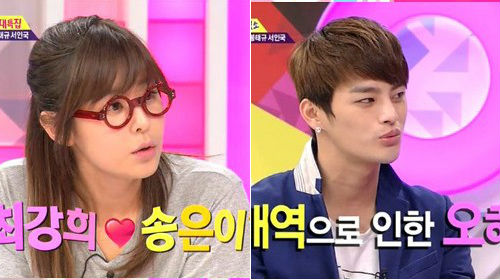 Actress Choi Kang Hee and actor/singer Seo In Gook spoke up about their own gay rumors.

During the episode, MC Shin Dong Yup began with, “Out of all the rumors about Choi Kang Hee, there are rumors that she is a lesbian,” and “There’s even a rumor that she is dating Song Eun Yi.”

To this, Choi Kang Hee responded, “[The word ‘lesbian’] keeps coming up on the related search terms on portal sites so I keep erasing it.”

She continued, “The rumors never reach me but it keeps showing up on the related search terms,” and “I was even in the top 5 for a lesbian popularity poll,” as she coolly dismissed these rumors.

Others such as Bong Tae Gyu were surprised at Choi Kang Hee’s level of coolness by commenting, “Are you allowed to talk like this?”

After hearing this, Seo In Gook added, “For me, ‘Seo In Gook gay’ also comes up for the related search terms.”

He explained, “In ‘Answer Me 1997,’ Hoya‘s character liked me and in K.Will’s music video, I played a gay character who liked Ahn Jae Hyun,” and “Afterwards, gay rumors kept surfacing and so the related search terms came up.”

In related news, Choi Kang Hee made headlines last week for stating that Jo Jung Chi was her ideal type on “We Got Married.” Also, Seo In Gook is receiving much love for his appearances on “I Live Alone.”

Choi Kang Hee
KPLG
Seo In Gook
Hwashin
How does this article make you feel?