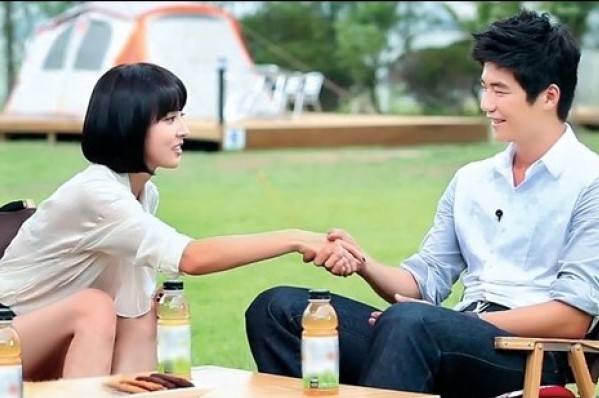 On May 17, soccer player Ki Sung Yueng posted a long letter to his fans regarding his upcoming wedding in July and apologizing to his soon-to-be wife actress Han Hye Jin on his facebook.

The post starts out, “I wanted to write sooner, but only got to come around to it now. To be honest, I’ve been thinking about marrying Han Hye Jin since when I first started dating her.”

He continued and talked about the difficulties of being a celebrity couple. He said, “Both she and I thought about all the challenges we have faced. Since we receive great attention from other people due to the nature of our jobs, things have been rather difficult. I should have been able to protect and love Hye Jin, who’s an actress, but…”

He also explained the initials embroidered on his soccer cleats, which first sparked the public’s curiosity about Ki Sung Yueng’s possible girlfriend. He explained, “I didn’t mean much when I embroidered those initials. I just really wanted to have that loving feelings I have for her when I’m on the field, so I didn’t think much before putting them on my cleats. I felt so bad that I didn’t get to protect Hye Jin. I knew I wanted to marry her, spend the rest of my life with her, so I couldn’t help but to feel sorry for her and about the situation, what I have caused in her life.”

Ki Sung Yueng also told his and Han Hye Jin’s fans to stop making up or believing rumors about the couple’s relationship and upcoming wedding. He said, ” The main reason why I’m writing this, is because I realize that there are many stories about us circulating around and I think it’s only right to straighten things out myself. I understand that many of you are worried about us due to our special circumstances. But I just wanted to let you know that I want to marry Hye Jin for the right reasons. She’s always so considerate and praying for me. She’s someone I could lean on throughout the rest of my life. She is so passionate about her job, doing the best she can in acting. I was scared at first, but I knew that this was going to be the biggest regret in my life if I let go of her. I just wanted to spend the rest of my life next to her.”

He continued, “It took us unusually short period of time since when we first started seeing each other until we made the decision to get married. I just wanted to clarify that it’s not because I’m lonely and living alone. I wanted to show Hye Jin that I mean it when I say that she makes me happy and I want to spend the rest of my life with her. And I thought action speaks louder than words. I’m so in love with Hye Jin and am beyond excited about creating a family with her. No matter what other people have to say, all I want to do right now is to just embrace Hye Jin tightly in my arms.”

Lastly, he ended the post by saying, “We will live together well. She’s not pregnant like so many of you are assuming right now. I’d like to meet little-Ki, too, but not now. I would like to sincerely thank all of you who are so supportive of us. I will try my best to improve myself as a soccer player, too. This moment in my life is probably the happiest moment of my life. I will strive to live a fuller, happier life from here on.”

Ki Sung Yueng and Han Hye Jin announced their plans to marry each other on May 10, only after about three months of dating. Currently, Han Hye Jin is filming upcoming movie”When a Man Loves” and Ki Sung Yueng is still in season, playing soccer in England. The details of the wedding have not been announced yet.

Han Hye Jin
Ki Sung Yueng
How does this article make you feel?