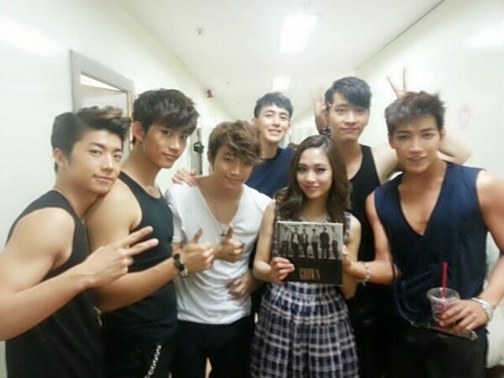 Recently on May 17 on her Twitter,miss A’s Fei uploaded a photo along with an encouraging message, “2PM, you must’ve worked so hard. Fighting.”

In the picture is Fei holding 2PM’s new CD. She is surrounded by the members of 2PM, who recently made their comeback with a new album titled “Grown.” Encircled by the muscular and handsome 2PM members, Fei looks especially small and beautiful in this photo.

Netizens that saw this picture commented, “How nice of Fei to promote 2PM’s new album,” “Fei is surrounded by beast-dols,” “I hope Fei makes her comeback soon too,” and “Good luck to both 2PM and Fei.”

Meanwhile, Fei appeared on MBC’s “Dancing with the Star 3” and was praised for her skills.

2PM
Fei
miss A
KPLG
grown
How does this article make you feel?